Common drug could increase risk of sudden death in racehorses

A drug that has been widely used in Thoroughbred racehorses in North America could increase the risk of sudden death according to a new study.

The research also identified other risk factors associated with sudden death, relating to the circumstances of the race and individual histories of the horses.

The work was funded by the Grayson Jockey Club Foundation. A report is published in the Journal of the American Veterinary Medical Association.

The study analysed over four million starts in horse racing over a 12-year period, using data recorded in the Equine Injury Database (EID), which contains details of nearly all official race starts made in the USA and Canada. About one in 10,000 race starts resulted in a racing-related sudden death for a horse.

For this study, “sudden death” was taken to include any fatality occurring within three days of racing, where the cause of death recorded in the EID was sudden death, pulmonary haemorrhage, exercise-induced pulmonary haemorrhage (EIPH), post-exertional distress/heatstroke (PED), or cardiac arrhythmia. Fatalities due to catastrophic musculoskeletal injury were not included.

The researchers identified a notable risk factor related to race day medication. Horses that were recorded as being administered furosemide were 62% more likely to experience sudden death compared to horses that weren’t on furosemide.

Furosemide (also known as frusemide and by the trade name Lasix) has been used to prevent exercise-induced pulmonary haemorrhage (bleeding in the airways). It is also associated with enhanced racing performance. As a result, 94% of horse starts in the study were on furosemide.

The ethics of race day medication are controversial. Furosemide is already restricted or prohibited on the day of racing in certain circumstances, depending on jurisdiction.

The results also suggest that it might be possible to identify horses at risk of sudden death before they experience it – for example, due to previous injury and interruption to training/racing.

Amongst other findings were that the risk of sudden death was greater for stallions compared with mares, and for horses five years or older compared with horses three years old or younger. Other risk factors identified include season and value of race and race distance.

Dr Bennett said: “Over the last 12 years, the overall risk of fatality within three days of racing has decreased by over 30%, but the incidence rate of sudden deaths has not changed significantly. This suggests that while interventions have been made which have contributed to a reduction in catastrophic injury, there are different sources of risk for sudden death which have not yet been identified.

“This study suggests that a risk profile, identifying which horses are at the greatest risk of sudden death, may be possible. Given how rare the outcome is, further work is required to establish any potential interventions which might contribute to a reduction in sudden deaths.

“On the association between furosemide use and sudden death, the fact that furosemide use is so common makes this result particularly remarkable given the statistical power of this large-scale study. Discussions around the ethics of race day administration of drugs should factor in potential risks such as those identified here, and further work is required to understand exactly why we identified this association.”

Posted by Mark Andrews at 11:22 am No comments:

Eye worm infection (Thelaziosis) may be a neglected disease in Europe, according to a recent report.

In the United States, the infection rate for cattle and horses in has been estimated at 15% to 38%. In Europe, equine thelaziosis has been reported occasionally in countries such as Russian Federation, England, France, Germany, Sweden and Italy.

Eyeworms live in the tear glands, conjunctival sac, and under the eyelids. The intermediate hosts are non-biting flies, such as Musca autumnalis, which swallow the larvae as they feed on the lachrymal secretions. Larvae become infective within 2-4 weeks and are deposited on the horse’s eye when the fly feeds. In about 10 weeks the adult worms produce more larvae and the cycle continues.

Infections may occur year-round, but disease outbreaks usually are associated with the warm season when the flies are more active.

Infections often produce no obvious signs. However, inflammation of the conjunctiva and eyelids can occur, and more severe cases may show inflammation, swelling, and cloudiness of the cornea.

A study in Romania, examined post-mortem specimens from 273 horses. The work, by Vlad-Dan Cotuțiu, and colleagues, is reported in Parasites & Vectors.

They found 12 infected horses (4.39%). They recovered 87 worms, which they identified as T. lacrymalis. They report that the intensity of infestation varied between one and 33 nematodes/animal. Five animals were infected in both eyes.

The numbers found were too low to reach statistically significant conclusions. However, the authors suggest that altitude may be a factor in the occurrence of thelaziosis. “In this study there were no infested animals originating from the alpine ecoregion (0 of 45); therefore, a plausible explanation could be the decreased vector abundance and shorter seasonal activity at higher altitudes.”

They also suggest that the widespread use of oral deworming protocols, including macrocyclic lactones or fenbendazole, probably contributed to the low prevalence.

The authors conclude: “We consider equine thelaziosis a neglected disease in Europe, which requires more attention from veterinary practitioners mainly from an animal welfare point of view due to the potentially severe clinical impact.”

Horses Inside Out annual conference - Call for posters 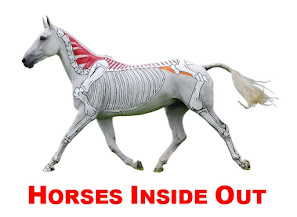 There’s still time to submit posters for presentation at the 2023 Horses Inside Out Conference.

Posters can be submitted by students, lecturers, research professionals or companies. They can be about research conducted by the author or literature reviews about the chosen subject. Posters that have been presented at previous conferences can be submitted.

A competition for the best scientific poster will be judged by Dr Andrew Hemmings and Dr Jessica Kidd.

For more details of the Horses Inside Out Conference 2023, go to:

Posted by Mark Andrews at 11:40 pm No comments: 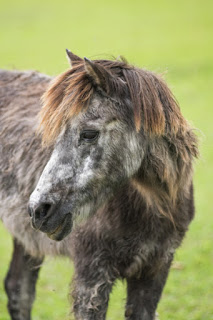 PPID is the most common endocrine disorder of older equids, affecting more than 20% of aged horses, ponies and donkeys. Applicants considering submitting a research proposal focused on this disease are directed to learn more about research questions of interest as identified during a PPID priority-setting partnership workshop.

Participants at the workshop reached a consensus on the top 10 questions of interest. These focused on long-term prognosis, diagnostic accuracy, efficacy of pergolide treatment, alternative treatment/management strategies and potential treatment options for poor responders to pergolide (see below.) 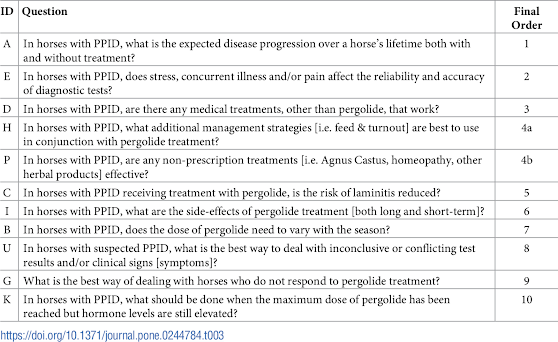 A report* of the workshop is published in PLOS ONE. The quantity of questions generated indicates that there is still much to find out about the diagnosis, treatment and prognosis of PPID.

All proposal topics should seek to advance the health and overall welfare of domesticated horses, ponies, mules, or donkeys. Applications are reviewed and rated based on impact and scientific rigor by the Foundation’s scientific advisory boards, made up of topic experts in the veterinary community.

Applications will be accepted until December 16, 2022. Interested researchers can find the proposal guidelines, proposal template, and other information at Morris Animal Foundation Apply for a Grant.

Posted by Mark Andrews at 1:53 pm No comments: