Are "normal" horse temperatures too high?

A normal rectal temperature is a useful indicator of health.

Along with heart rate (pulse) and respiratory rate, rectal temperature is one of the “vital signs” that can alert us to the presence of disease. Ideally temperature should be measured regularly - both to get the horse used to the procedure and to establish what is normal for that individual.

But what is normal? A recently published study suggests that previously published ranges of “normal” temperatures may be too high.

Researchers from Nottingham Trent University (NTU) and the Royal Agricultural University investigated the use of body temperature in assessing equine health. They argue that current tradition-based guidelines may be inaccurate and require further investigation.

As part of the study Emily Hall, Dr Anne Carter and Dr Carol Hall from Nottingham Trent University, in collaboration with Dr Anne Stevenson from the Royal Agricultural University, researched the normal body temperature of horses on the NTU yard. Lubricated, digital thermometers were used and inserted to a standard depth of 5cm.

The findings showed that the upper limit of the published ranges (38.5°C) is typically 0.5°C higher than the results from clinically normal horses in this study. The researchers found the normal temperature range for horses on this yard was 36.0-38.0°C.

The research, led by the University's School of Animal, Rural and Environmental Sciences, included over 600 measurements from 41 healthy adult horses. The horses ranged in age from 2 - 23 years.

A full report of the study is published in the Journal of Equine Veterinary Science.

Lead researcher, veterinary surgeon Emily Hall, said, "Due to factors such as antibiotic resistance, climate change, and ever-increasing movement of horses, it is increasingly important that early signs of ill-health or disease are picked up as early as possible.

“By establishing a reference range specific to the yard at NTU, we can now be more confident in identifying horses that are too hot, or too cold, and take appropriate action.”

The study found that the overall equine temperature reference ranges cited in textbooks may need reviewing and updating. The aim is to repeat this study on other equine yards around the UK in order to review the overall normal range for all horses across the country.

Study of horse and rider weights 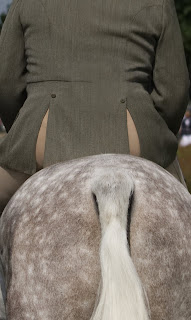 A rider that is too heavy for a horse could cause temporary lameness and signs of pain according to recent research.

The potential health and welfare implications of a high rider:horse bodyweight ratios were explored in a pilot study led by Dr Sue Dyson, Head of Clinical Orthopaedics at the Animal Health Trust’s Centre for Equine Studies, Newmarket.

Six horses were used for the study. All were in regular work and were not lame. They were ridden by each of four riders of differing weights: Light (L), Moderate (M), Heavy (H) and Very Heavy (VH).

The riders each performed a standard 30‐min ‘dressage‐test'. The research team looked for signs of lameness (graded 0-8) and behavioural signs of pain (scored 0-24). The test was abandoned if signs of lameness reached 3 or more in one limb or 2 or more in multiple limbs. Lameness was assessed by Dyson and confirmed using objective gait assessment date from inertial measurement units placed over the pelvis, withers and poll.

Similarly, if 10 or more behavioural markers of pain, (such as ears being held back, constant moving of head, tail lashing) were seen, the test was stopped.

They reassessed the horses moving in hand 45–60 min after any abandoned test. At that stage all horses trotted sound. At the end of the study, all horses moved well when ridden.

The conclusion was that large riders can induce temporary lameness and behaviours consistent with musculoskeletal pain. The researchers suggest that this may relate to rider bodyweight and/or weight distribution. They noted that moderate and heavyweight riders had markedly different test abandonment rates, despite having similar Body Mass Index (BMI). So, they suggest that bodyweight is probably more relevant than BMI.

Dyson said: “The results indicate that every rider and especially heavier riders should ride a horse or pony of appropriate size and fitness for the rider’s weight, with a saddle that is correctly fitted for both horse and rider.”

For the past couple of years, the Equine Vet Journal has been publishing video abstracts of some of its articles. They provide a quick glimpse of the subject to see if you want to delve further.

The diverse range of subjects has included:

Each includes a link to the written abstract, often with free access to the full text paper.