Exuberant granulation tissue ("proud flesh") is a common complication of wounds to the horse's lower limbs. It may delay healing and make scar formation more likely.

Dr Andressa Silveira and colleagues at the University of Guelph in Ontario, Canada, have been examining whether shock wave therapy could be used to promote healing and reduce the risk of exuberant granulation tissue.

They found that wounds treated with unfocussed extracorporeal shock wave therapy (ESWT) seemed to produce less exuberant granulation tissue, and looked healthier than untreated wounds, although they did not heal more quickly.

The researchers made five full-thickness skin wounds, (2.5 cm x 2.5cm) on the dorsal aspect of the metacarpus of both fore limbs of each of six horses.

They treated one leg from each horse with ESWT, and left the other limb untreated to act as a control.

The wounds were treated immediately after they were made and then at weekly intervals for a total of four occasions. Each treatment comprised 625 pulses - distributed evenly around the wound and surrounding healthy skin edges.

However, there was no significant difference between biopsies taken from treated and untreated wounds at weekly intervals throughout the study. Neither did treatment have any effect on wound size.

Further investigations are required before shock wave therapy can be recommended for wound treatment. ESWT may be helpful, but so far, there is not enough evidence to support its use in clinical cases.
Posted by Mark Andrews at 10:46 am No comments:

Not all bad news about dewormers

There are numerous reports of the spread of resistance to dewormers.  So it is encouraging to receive some good news for a change.

Research carried out by Dr Craig Reinemeyer and others at East Tennessee Clinical Research Inc., has revealed some positive findings.

In separate studies they examined the efficacy of dewormers against Oxyuris equi, and against macrocyclic lactone resistant Parascaris equorum.

Oxyuris equi (equine pinworm) rarely causes serious problems for the horse, but does cause irritation when the female lays the sticky eggs on the skin around the anus of the host. It has been assumed that most routine dewormers will control it. However, anecdotal reports that anthelmintic treatments were not as effective against Oxyuris equi as expected prompted Dr Reinemeyer’s study.

Dr Reinemeyer found that pyrantel pamoate (at 13.2mg/kg) was 91.2% effective, and ivermectin (200mcg/kg) 96.0% effective, against the adult worms. Both products were more than 99% effective against the fourth-stage O. equi larvae.

Unlike O. equi, Parascaris equorum does cause significant problems, especially in foals, in which heavy infestations can lead to intestinal obstruction or rupture.

Recent reports have recorded an increasing problem of reduced efficacy of macrocyclic lactone anthelmintics (such as ivermectin) against these parasites.

In a study of experimentally infected foals, the researchers found that pyrantel pamoate administered at 13.2mg/kg was effective against a macrocyclic lactone -resistant (ML-R) isolate of Parascaris equorum.

Mean ascarid egg counts were reduced by 98.8% two weeks after treatment - compared with a reduction of only 47% two weeks after ivermectin (200mcg/kg). Post mortem examination of intestinal contents showed that the paste formulation of pyrantel pamoate was 97.3% effective against the MLR P. equorum.

It is reassuring to know that these drugs were effective under the specific conditions of the study.  But that’s not to say that they will always remain so, or that the results are representative of all worm populations. The advice to treat for worms only when necessary and to monitor the effectiveness of any treatment still stands.
Posted by Mark Andrews at 10:11 pm No comments: 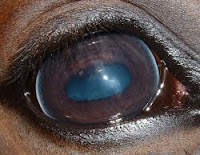 We may need to look again at how we treat eye infections in the light of research that found that horses produce more tears than previously thought.

Tears protect the eye by keeping the cornea moist. The tear film also carries nutrients to the cornea, which has no blood supply of its own.

The same route is also used to deliver medication to the cornea.

How many tears does a healthy horse produce? How quickly is the tear film replaced? There have been few studies into this, yet it is important to know, as it will affect the concentration of drugs applied to the eye - and so may affect their efficacy.

Dr Thomas Chen and Dr Daniel A. Ward examined the rate of production of tears in normal horses' eyes, in a study carried out at the College of Veterinary Medicine, University of Tennessee, Knoxville. They instilled fluorescein dye onto the eye and then collected small samples of the tear film, measured the fluorescein concentration, and noted how it changed with time.

They used two mathematical approaches to analyse the results. One method, which was considered the more accurate, suggested that the rate of tear production was 33.6mL /min. The mean tear film volume was estimated to be 233.74 mL.

The results showed that the tear film was likely to be completely replaced within a matter of 7 minutes. This suggests that current treatment protocols may not be adequate, and that drugs may need to be administered more frequently.

Read more at  the Equine Science Update website
Posted by Mark Andrews at 9:51 pm No comments:

One of the problems faced by owners of overweight horses, is monitoring the response to weight loss programmes. Obviously weighing the horse would be ideal but is often not possible. Weigh tapes placed around the heart girth (just behind the elbow) may not detect any change despite a decrease (or increase ) in body weight, because that is not where the excess fat is deposited.

One study conducted last year by researchers at the Department of Veterinary Clinical Science at the University of Liverpool and supported by World Horse Welfare, highlighted the need for a more accurate method for monitoring early weight loss in overweight ponies rather than relying on conventional equine body condition scoring.

A further study comparing two practical weight loss protocols for the management of overweight and obese horses and ponies was conducted earlier this year by the Department of Veterinary Clinical Science at the University of Liverpool. It was funded by the government-initiated Knowledge Transfer Partnership and the WALTHAM Equine Studies Group. It confirmed that the proportional change in belly girth was more closely associated with changes in body weight than the proportional change in heart girth in the early stages of weight loss.

Dr Caroline Argo and Alex Dugdale of the Department of Veterinary Clinical Science at the University of Liverpool said: “It is important for owners to understand that early weight loss is not immediately recognisable as a change in the horse or pony’s overall appearance or body condition score. However, owners do need some assurance that measures taken to promote weight loss are being effective. Simply measuring belly girth at regular (weekly) intervals can provide this. Without such reassurance, we might be inclined to either give up or more alarmingly, harmfully increase our efforts to induce weight loss.”

Horse welfare and rider safety can be enhanced by the application of new technology to the training of both horse and rider. That was one of the messages to come out of the 6th International Society for Equitation Science conference held recently in Sweden.

In the past few years there has been a growing interest in equitation science (the science of horse riding and horse training.) A selection of recent research, covering a wide range of topics, was presented at the conference, held this year at the Swedish University of Agricultural Sciences (SLU) in Uppsala.

Presentations covered training and education of horses and riders, from both a scientific and a practical perspective, and highlighted the importance of a thorough understanding of learning theory and physical capacities of the horse to safeguard horse welfare and human safety.

The first day focused on the mental and physical capacity for training and learning in both horses and humans.

Teachers from Strömsholm and the national stud at Flyinge demonstrated their approach to teaching young riders and training horses. Scientists from SLU presented examples of ongoing research projects, and showed how emerging technologies can measure important variables such as the pressure under saddle and the distribution of lameness.

The last day focused on the latest research in the field of horse welfare and human safety and, in a final panel discussion, the conference explored how these two topics can positively affect each other.

Abstracts of the presentations are available in pdf format for (free) download from the ISES website.
Posted by Mark Andrews at 9:48 pm No comments: