Third Welfare and Safety of the Racehorse Summit

The forthcoming third Health and Welfare of the Racehorse Summit to be held by the  Grayson-Jockey Club Foundation  at the Keeneland Sales Pavilion in Lexington, Ky., June 28-29, 2010, aims to identify ways of enhancing the safety and soundness of Thoroughbred racehorses.

Attendance at the meeting is by invitation only. But you don't need to miss out. Thanks to modern technology and Keeneland.com the public sessions of the summit will be made available to all on a live web stream.

Other topics include a panel discussion on race track surfaces, and updates on the Racing Medication and Testing Consortium, the NTRA Safety and Integrity Alliance, and the Thoroughbred Safety Committee.

There will also be panel discussions on racing equipment and safety,  racetrack environment and training practices, and transitioning thoroughbred racehorses to second careers.


For more information, including the link to the web stream, see:

http://www.grayson-jockeyclub.org/summitDisplay.asp
Posted by Mark Andrews at 8:55 am No comments: Horses with Cushing’s disease (also known as pituitary pars intermedia dysfunction ; PPID) are more  likely to have higher fecal egg counts than are healthy horses according to a recent study.

Dr Dianne McFarlane and colleagues compared the response to anthelmintic treatment on fecal egg counts in healthy horses and those with Cushing’s disease.

Twenty-nine healthy horses  (ranging in age from 4 to 35 years ) and 13 horses with PPID (13- 33 years old) were used in the study. The presence or absence of PPID was confirmed by clinical signs and plasma alpha MSH assay (reference range for normal horses <35pmol/L; PPID horses ≥45pmol/L)

The researchers performed faecal egg counts at 2-week intervals before and after treatment with ivermectin.

At 2 and 4 weeks after treatment with ivermectin all horses in the study had negative fecal egg counts.

Horses with PPID had higher egg counts than did healthy horses, both before and at 6 - 12 weeks after treatment.  This difference could not be explained by the PPID horses being older than the control horses, as the researchers found no correlation between age and fecal egg count.

A fecal egg count greater than 200 epg is often taken as an indication that anthelmintic treatment is required. In this study 6 of the 13 horses with PPID reached the 200epg threshold by 10 weeks after ivermectin treatment. In contrast only 2 of 25 control horses had reached the threshold at the same time - a difference that was statistically significant.

“Given similar environmental conditions, horses with PPID were more likely to have higher fecal egg counts than were healthy horses” Dr McFarlane reports.

The findings suggest that horses with PPID may pose a risk for pasture hygiene if not managed properly.

On the other hand, age alone does not appear to increase the horse’s susceptibility to parasitism. However, the researchers point out that only a small number of horses were involved in that analysis. More work is required to confirm that older horses do not need treating differently to younger horses when it comes to deworming.

Horses are at increased risk of Hendra virus (HeV) infection at this time of year, the Australian Veterinary Association (AVA) has warned. The disease is usually fatal, and can affect humans that have been in contact with affected horses.

The virus is named after the suburb of Brisbane, Queensland, Australia, in which it was first isolated. In that outbreak in horses at a training centre, 14 horses died. Seven other horses were shown to have been infected and were humanely destroyed. Affected animals typically showed severe lung damage. Two humans were affected, one of whom died.

“Anyone working with horses should be on the lookout and immediately report any suspected cases of Hendra virus infection over the coming months,” said Dr Barry Smyth, Vice-President of the Australian Veterinary Association.

“Wet weather in some parts of the country has caused flying foxes to take to the air to find food in new areas. An influx of more than 130,000 into Victoria was confirmed by scientists just last week. 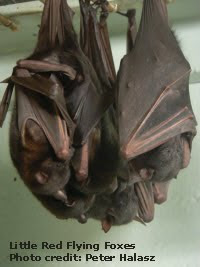 “So far cases of Hendra infection have been restricted to Queensland and New South Wales, however there is a potential for the disease wherever there are flying foxes.

Common signs to look out for include respiratory distress, frothy nasal discharge, elevated body temperature (above 40° C) and elevated heart rate. Some horses may show neurological signs including incoordination and head pressing. However, it is important to realise there are no specific signs of infection.

The few cases of human Hendra virus infection have been the result of very close contact with horses infected with the virus. Body fluids or secretions from infected animals are likely to contain the virus.

At the time the people became infected the horses did not appear sick.

“The risk can be greatly reduced by adopting good hygiene practices as a matter of routine and taking increased precautions around any sick horse,” said Dr Smyth.
Posted by Mark Andrews at 10:24 am No comments:

Thanks to the opportunities of modern transport, it's not only horses that can travel the world. They may also take with them their infectious diseases.

The recent equine influenza outbreak in Australia showed what can happen when susceptible horses are exposed to infection.

So with all the current scientific knowledge about  vaccination, immunity and infectious disease in horses, What can be done to prevent, control  limit the risk of similar outbreaks disasters events happening in the future.

Recently a group know as the Prevention of Equine Infectious Disease Guidelines Group (PrEquID) has been set up to compile recommendations for preventing and managing major equine infectious diseases, based on current scientific knowledge and available vaccines.

After an initial meeting in November 2009, the group met again in March 2010, to discuss guidelines for Equine Influenza and Equine Herpes virus infections. These diseases are widely considered to have a significant impact on the horse industry, based on disease outcome, economic impact, veterinary care and travel restrictions.

Practical, evidence-based recommendations are currently being finalised and will be made available shortly.

“Our aim is to develop overarching international guidelines for the management of infectious diseases,” said Professor Marian C Horzinek, Chairman of PrEquID. “These should contain practical, evidence-based recommendations for disease control and horse movement.”

Professor Peter Timoney, of the University of Kentucky, added, “the equine industry worldwide is facing an unprecedented threat from the challenge of infectious diseases. It’s a huge industry involving a complex range of stakeholders, including veterinarians, owners, breeders, trainers, shippers and regulators. We must set aside individual and national agendas and concentrate on the bigger picture if we’re to achieve greater international control over the spread of equine diseases and protect our industry for the future.”

The establishment of PrEquID was initiated and sponsored by Fort Dodge Animal Health (a division of Wyeth). With the acquisition of Wyeth by Pfizer in 2009, this initiative is now supported by Pfizer Animal Health.
Posted by Mark Andrews at 10:09 am No comments: