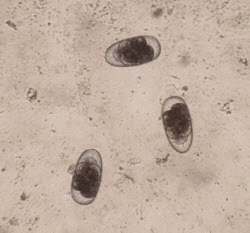 Strongylus vulgaris (commonly known as the blood worm) used to be a common cause of colic before the advent of ivermectin, which proved to be very effective against the parasite. The larvae migrate up the arteries supplying the intestines, causing damage as they go. This can lead to thrombus formation and ischaemic damage, typically involving the large intestine.

Anthelmintic resistance, particularly among the cyathostomins (small red worms), has led to reduced use of anthelmintics. In some countries, including Sweden, anthelmintics have been restricted to use on prescription only.  There is concern that this may be allowing Strongylus vulgaris to make a comeback.

What is the current relationship between gastrointestinal parasites and colic? Research has been carried out at the Swedish University of Agricultural Sciences, in Uppsala, Sweden. The work, by Ylva Hedberg-Alm and colleagues, is published in the journal Animals (Basel).

Blood and faecal samples were collected from horses presented to the Horse Clinic, at the University Animal Hospital. Each horse with a gastro-intestinal condition (colic, colitis, peritonitis, weight loss) was matched with a control horse of similar age seen during the same week for a condition unrelated to the gastrointestinal tract. The owners were questioned about management and history

The findings were compared between those presenting with colic and those with problems unrelated to colic. A total of 137 cases and 137 controls were included in the study. Age and gender distribution was similar between the groups.

Faecal samples were examined for strongyle egg counts, and for Anoplocephala perfoliata (tapeworm) eggs. The presence of S. vulgaris was confirmed using a polymerase chain reaction (PCR) test. (S. vulgaris eggs look like those of other strongyles, including the more common cyathostomins.)

Blood samples were evaluated for antibodies to S. vulgaris using an ELISA test.

The researchers found that exposure of Swedish horses to S. vulgaris was common. Most horses, both cases and controls, were positive in the S. vulgaris ELISA test. In addition, horses with peritonitis had significantly higher ELISA values compared to controls and to other gastrointestinal diagnoses, suggesting S. vulgaris was involved in this case group.

They also found that despite new legislation, 29% of owners did not use faecal analyses to monitor the parasite burden. The use of additional methods to diagnose specific parasites, such as S. vulgaris, was low. Owners rarely used pasture management methods to reduce the parasite burden on the grazing.

The authors suggest that, considering exposure to S. vulgaris appears high, there is a need for education in specific faecal diagnostics and pasture management.

A recent study found that heel contraction was more common in shod than in barefoot horses, but did not confirm that metal horseshoes were to blame.

Contracted heels have been defined by the ratio of frog length to frog width. The foot can be described as contracted when the frog width is less than 2/3rds its length. The affected foot is less able to absorb concussion and may lead to lameness.

Magdalena Senderska-Płonowska, with colleagues at the Wroclaw University of Environmental and Life 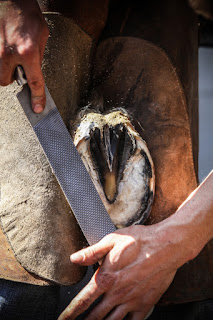 Sciences, Wrocław, Poland, assessed the influence of shoeing and other risk factors, such as age, access to paddock, and breed, on heel contraction.

The 114 horses included in the study were of various warmblood  breeds, and were being used as riding-school horses, pleasure horses, and sport horses. They were considered to be sound by their owners or riders, were at least three years old, and came from yards across Poland.

One group had been kept barefoot all their lives; the others had been regularly shod with metal shoes for at least the previous year.

Dr Senderska-Płonowska measured the width and length of the frog of all four feet of the horses in the study. She found that individual horse features, such as yard and breed, had the most significant impact on the width:length ratio of the frog.

There was a significant difference in occurrence of heel contraction between yards. Breed was also an important factor. Silesian and Arabian horses had significantly greater frog width: length ratio compared with other breeds.

Being shod did not affect the frog width: length ratio.

A full report of the research is published in the Journal of Equine Veterinary Science. Senderska-Płonowska concludes: “heel contraction is a multifactorial problem, mainly caused by breed and unknown features correlated with the individual. The results disputed the popular myth of metal shoes being main cause of contraction, an important factor for all hoof-care providers to be aware of. “

Because of the significant difference in incidence of contraction between yards, she suggests the need for more research on larger groups of well-defined phenotypes of horses from yards with low and high incidence of heel contraction to identify the environmental factors responsible.

Email ThisBlogThis!Share to TwitterShare to FacebookShare to Pinterest
Labels: hoof

Effect of light on wound healing

Peter Michanek and colleagues used eight healthy adult standardbred horses in the randomised controlled study. The research team made a circular (2cm diameter) surgical skin wound on both sides of the neck of each horse.

The wound on one side was chosen at random to receive the light treatment. The opposite side was left untreated. Light therapy followed a standardised protocol and was given by the same operators throughout the study. Treatment was applied daily (comprising red light for 95 seconds and NIR light for 185 seconds) 5 days a week for 4 weeks.

Wound healing was monitored by someone who did not know whether the wound had received light treatment or not.

They conclude that, in this study, pulsating visible red light or NIR was no better than no treatment in promoting healing of experimental skin wounds.

Posted by Mark Andrews at 11:30 pm No comments:

How does the horse owner’s attitude towards horse ownership affect horse welfare? 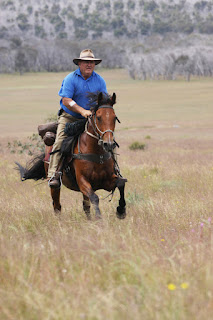 Research from the University of Melbourne, Australia, examined the relationships between horse owner background factors (such as age, income, place of residence, knowledge and experience) and their attitudes towards horse husbandry and management behaviour.

Lead researcher Lauren M. Hemsworth, of the Animal Welfare Science Centre, in the Faculty of Veterinary and Agricultural Sciences, used a questionnaire to assess the owners’ attitude to horse ownership and management, together with an on-site inspection of horse husbandry and management on premises in Victoria, Australia. Data from 57 owners and 98 horses were included in the study.

She found relationships between horse owner background factors and the owners’ attitudes towards horse husbandry and management behaviour in areas such as parasite control, hoof care, and dental care. For example, favourable behavioural beliefs towards appropriate parasite control were associated with a young age and frequent riding instruction.

A full account of the work is published in the journal Animals.

The authors report that, “generally, belief variables correlated significantly with background factors that were primarily related to knowledge and experience. Further, beliefs concerning three key husbandry practices (parasite control, hoof care, and dental care) all appear to be predicted to some degree by background factors associated with knowledge and experience.”

So, they suggest that an educational strategy to improve the horse owner’s appreciation of the welfare implications of their behaviour may be important in safeguarding recreational horse welfare, but further research is warranted.

If you have had a fall in the past 12 months, you are urged to take part in research on stirrup safety.

If you ride, then falls go with the territory. One aspect of falls and injuries that is often speculated about but to date has not been properly studied is the role that the stirrups play in safety or risk of injury. 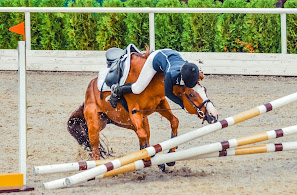 Dr David Marlin, Cambridge (UK) and Dr Jane Williams, Hartpury University (UK) have set up a survey to collect data on recent falls (within the past 12 months). The aim is to try and understand what factors related to the stirrups may increase or reduce the risk of injury in riders.

The survey consists of 19 short questions and should take about 4 minutes to complete. No personal data will be collected.

To take part in the survey go to:

Posted by Mark Andrews at 9:03 pm No comments: 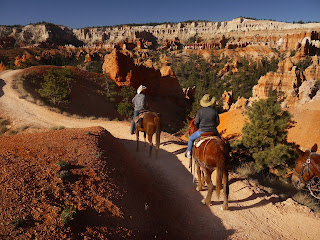 Horse owners in the United States are invited to take part in a survey looking at the US equine industry.

The survey aims to gauge participation trends and management practices in the U.S. equine industry. It also seeks to gather information regarding the most important issues facing the industry.

If you currently own or manage at least one horse, pony, mule or donkey, are 18 years of age or over, and live in the United States, you are eligible to participate. It is anticipated that the survey, which the promoters emphasize is anonymous, will take 15 minutes to complete.

Organized by American Horse Publications, a non-profit association, and sponsored by pharmaceutical company Zoetis, the survey is open until March 30, 2021.

For more details, go to:

Posted by Mark Andrews at 1:13 pm No comments: