Are bacteria involved in stomach ulcers?

The micro-organism Helicobacter pyloris has been implicated in a number of human medical conditions, including chronic gastritis, gastric ulcers, and neoplasia. Could similar organisms be involved in gastric lesions in horses? A Danish study has been investigating.

She examined specimens collected from an abattoir, and found lesions on the glandular mucosa in 36 of 63 stomachs. These included hyperplastic rugae (13), polypoid structures (2), and focal erosions (21).

In general, very few bacteria were associated with the gastric mucosa in either the damaged or normal stomach. No Helicobacter was found.

However, one stomach did contain a single erosion 1x2cm in size, which was colonised by bacteria. No bacteria were found in the surrounding normal gastric mucosa.

Cloning analysis of the bacteria showed them to be a mixed infection of Enterococcus faecium and an Escherichia-like organism, which was identified as most likely to be Escherichia fergusonii.

E. fergusonii has been reported as an emerging pathogen in human medicine and in some animal species.

Dr Husted suggests that further work needs to be done to clarify whether the organism is a significant pathogen in horses.

"Detection of a moderate to high amounts of any bacteria at the glandular mucosa level, as well as in the crypts should be cause for concern as this does not appear to be a normal finding in the equine glandular mucosa".

This study did not involve clinical cases. Dr Husted suggests that further studies of bacteria and their relationship to lesions in horses with clinical signs of gastric ulceration are warranted.

A worm-eating fungus has potential as a biological control for horse worms, according to research from Brazil.

Researchers at the department of veterinary medicine at the Federal University of Viçosa, in Brazil, led by Dr Fabio Braga found that a strain of Duddingtonia flagrans effectively reduced the numbers of viable cyathostomin infective larvae in laboratory tests.

Live L3-stage cyathostomin larvae were placed on plates containing 2% water-agar - 1000 larvae to each plate. To half of the plates 1000 D. flagrans conidia (spores) were added. Conidia were not added to some plates to provide controls.

After 7 days, they recovered the viable larvae from both the test and control plates. They found that the plates containing the D. flagrans contained significantly fewer viable cyathostomin larvae. Exposure to the fungus resulted in 93.64% reduction in cyathostomin numbers.
Posted by Mark Andrews at 6:56 pm No comments:

Email ThisBlogThis!Share to TwitterShare to FacebookShare to Pinterest
Labels: anthelmintics

Persistent mating-induced endometritis is a common cause of infertility in mares. Mating initiates an inflammatory response in the uterus. Normally this resolves without treatment. However, about 15% of mares still have fluid present in the uterus 24 hours after mating.

If the inflammation has not cleared by the time the fertilised egg reaches the uterus the pregnancy is unlikely to get established.

Factors that affect the ability of the uterus to remove inflammatory fluid include poor conformation, failure of the cervix to dilate, and abnormalities of uterine contractility.

In problem mares, oxytocin may be used to promote drainage of inflammatory fluid, and intrauterine antibiotics are frequently used.

What about anti-inflammatory drugs?

Research in the Equine Reproduction Laboratory of Colorado State University suggests that dexamethasone treatment for persistent mating-induced endometritis may have an adverse effect on ovulation. Dr Ryan Ferris and Dr Patrick McCue advise dexamethasone use should be limited to only 1-2 days - and the use of lower doses should be considered to avoid possible adverse effects on reproductive function.

In a separate study, Dr Horst Rojer and Dr Christine Aurich working at the University of Veterinary Sciences, Vienna, Austria, suggested that non-steroidal anti-inflammatories might be useful for treating mares with PMIE.

One in three horses, and over 80% of ponies, are currently believed to be in danger of fat-related health risks such as laminitis – the equine equivalent of a human heart attack.
Now a pioneering scientific study is set to put different breeds under 24-hour surveillance to find out what makes some horses pile on the extra pounds.
A research team from Edinburgh Napier University and horse feed manufacturer Dodson & Horrell have teamed up to run the three-year project. Tiny cameras, GPS devices and movement monitors will be attached to the animals in order to analyse every last aspect of their lifestyles.
“The equipment will allow us to distinguish between food-related effort and other exercise – the horse equivalent of a trip to the fridge or the gym,” said study leader Dr Dave Smith, a veterinary nursing lecturer at Edinburgh Napier University. 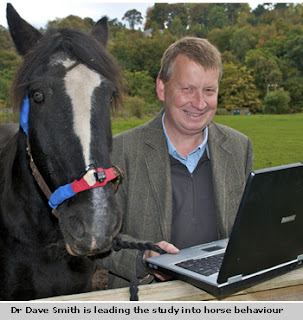 The research, which is the first of its kind, will be conducted at a Norfolk farm run by charity World Horse Welfare. Around 15 horses will initially graze in paddocks specially seeded with different grasses by retailer Oliver Seeds.
Dr Smith said: “We suspect a major factor in rising obesity levels has been the move from grazing in traditional meadows, which naturally feature a variety of grasses, to monoculture fields more suited to dairy cows.
“However, there are also horse and pony owners who, through overfeeding, are unwittingly killing with kindness. Even horses in ‘show’ condition can be significantly overweight.”
It's not just laminitis that threatens obese horses. Dr Teresa Hollands, Senior nutritionist at Dodson & Horrell, said that previous research had shown that obese horses were also at greater risk of developing skin, muscular and bone problems.
“Owners forget that although they might not be putting food in a bucket, these ponies and horses are over-consuming calories from grass,” she said. “What’s interesting is that some animals that graze together in the same field get fat, while others remain perfectly healthy. What we hope to find out with this study is if there is a horse equivalent of the human couch potato.”
Every chew and canter will be followed online by researchers via webcams attached to each horse.
“We will be watching them around the clock as they go about their natural routines,” said Dr Hollands. “It will allow us to find out who the grazers or gorgers are, exactly how far they travel, how much they eat, and what they eat.
“Once we have that data for each breed we will then be able to advise owners on how best to feed and manage their horses so they don’t get fat and unhealthy.”
Posted by Mark Andrews at 10:55 am No comments: