The colours deployed on hurdles and fences on British racecourses may be set to change following research led by the University of Exeter into the way that horses perceive colour.

The research, commissioned by the British Horseracing Authority (BHA) and Racing Foundation, was undertaken by Dr. Sarah Paul and Professor Martin Stevens of the University of Exeter with the aim of improving obstacle visibility for horses, thus reducing the risk of falls and injuries for horses and jockeys.

Horses can see some colours; but not the same range of colours that humans do.

Humans and other primates have three types of light-responsive cells (cones) in their eyes, giving what is called trichromatic colour vision. Normal human eyes detect four basic colours: red, green, yellow and blue. They can also differentiate up to 100 subtle variations in hue. Humans with red-green colour vision defects can only see two basic colours - yellow and blue.

Horses, in common with other non-primate mammals, have only two types of cone giving dichromatic vision. The colours seen by the horse are likely to be similar to those seen by humans with red-green colour blindness.

Presently, the colour used on hurdle frames and fence take-off boards and guard-rails is orange, based on human vision. However, as horses see colours differently, it is likely that the orange does not make the obstacle more visible to the horse.

The research phase of the project included testing the visibility of orange markers and other potential colours at 11 racecourses, and – in collaboration with trainer Richard Phillips – testing the behavioural responses of horses to more prominent colours in a controlled environment.
Orange was confirmed as having decreased visibility and contrast for horses against a range of natural and obstacle backgrounds.

The researchers found that yellow, blue, and white are more conspicuous against fences and their surroundings (foreground/background) than orange, especially yellow fluorescent colours.
The results were consistent under different weather conditions and time of day, except that yellow becomes less visible against the foreground turf under shade, whereas blue, white, and orange are more visible under shade. This effect of shade does not occur for other parts of the fence/hurdle, whereby fluorescent yellow remains most conspicuous.

The jumping responses of horses to fences with orange, yellow, blue, or white take-off boards and guard rails was tested.

The researchers found that the colour of the fences plays a role in both the angle that horses jump a fence and the total distance. Horses adjust their jump angles with colours that are different to orange, and white tends to produce a longer total jump distance.

The optimum colour combination, which is likely to combine the best features of visibility and horse responses under a range of conditions, is to use fluorescent yellow for all hurdles and guard-rails, and fluorescent white for take-off boards. This maximises visibility under all conditions while potentially facilitating better behavioural responses.

As a result, a recommendation has been approved by the sport's Racecourse Committee for a trial using fluorescent yellow for all hurdles and guard-rails, and fluorescent white for take-off boards at fences.

These colours have been determined to maximise visibility under a wide range of conditions for both humans and horses.

Retired jockey Ian Popham and conditional jockey Danny Hiskett acted as riders of the horses throughout the trial.

Ian Popham said: "From riding over the different coloured fences it was clear to me that over some colours the horses reacted differently and showed the obstacle more respect.

"I'm sure other riders will feel the same and this feels like a great idea and opportunity to make the sport safer for both horses and jockeys."

It has now been agreed that the next phase of the project should see a more extensive trial take place at training grounds to build up a significant dataset before rolling the trial out to a live racing environment.

The results of this research and the ongoing trials will be shared with other racing jurisdictions and equine organisations.

David Sykes, Director of Equine Health and Welfare for the BHA, said: "This fine and important project is an example of how British racing uses advanced scientific and veterinary research to constantly improve racehorse welfare, not only for thoroughbreds in Britain but across other nations and equine disciplines.

"As with the ongoing phased introduction of our padded hurdles – which have proven to reduce faller and injury rates – we will ensure to take our time with this project, make sure there are no unintended consequences and that the evidence of the ongoing trials continue to support the case for change.

"If that proves to be the case then we will look forward to seeing the new designs of hurdles and fences on racecourses, and hopefully further reducing our already declining faller rate."
Posted by Mark Andrews at 10:20 pm No comments:

Atypical myopathy (AM) is a frequently fatal, acute muscle disorder, which in Europe is associated with the ingestion of hypoglycin A, a toxin found in the leaves and seeds of trees such as the Acer pseudoplatanus (sycamore). However, a recent report from the Czech Republic suggests that it may be possible for the toxin to cross the placenta or pass to the foal in the milk.

The report, in the Journal of Veterinary Internal Medicine, describes a case of Atypical Myopathy in a new born foal.

The Haflinger foal showed signs of depression and weakness six hours after it was born. At twelve hours old if was unable to stand. Analysis of the foal's blood revealed increased concentrations of acylcarnitines and MCPA-carnitine characteristic of blood from AM affected horses.

How did the foal become exposed to the toxin? 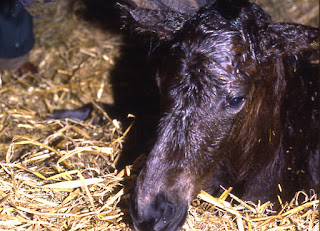 The mare had shown signs of AM in the sixth month of pregnancy. Again, the diagnosis was confirmed by laboratory tests. The mare recovered with treatment and the foal was born. Prior to foaling the mare had been grazing in a paddock containing sycamore trees, but showed no clinical signs of AM.

The report’s authors suggest two possible explanations: “(a)Hypoglycin A or its metabolites accumulated in the mare's placenta with consequent transfer to the foetus or (b) these compounds were secreted into mare's milk.”

Are you spending more time than necessary training your horse?

If you are repeatedly training your horse to do the same task every day, a recent study suggests that you could well be spending your time more productively.

The research, by equine scientists from Germany and Australia, found that allowing horses breaks of two days between training sessions rather than training daily results in similar learning progress over a period of 28 days. The researchers suggest that such a training schedule might be considered to make more efficient use of trainers’ (and horses’) time.

Uta König von Borstel, head of the Animal Husbandry, Behaviour and Welfare section at the Justus-Liebig University of Giessen, Germany and her team of researchers set out to find the optimal time interval between training repetitions of a learning task.

She presented her findings at the 14th International Society of Equitation Science (ISES) conference in Rome.

The aim of the study was to assess the speed a horse learns novel tasks when trained at different time intervals using negative reinforcement and then compare the results. Negative reinforcement training, often referred to as ‘pressure-release’, involves the removal of pressure in order to increase the likelihood of a horse repeating the desired behaviour.

While there is some scientific information available on the use of negative reinforcement training, little objective data currently exists regarding the optimal time interval between training sessions.
The researchers trained 39 horses ranging in age from 2-24 years to perform three different, unfamiliar tasks. One group of 20 horses was trained once daily and the second group of 19 were trained once every third day. The horses were trained, using negative reinforcement, to lower the head on poll pressure (HL), back up from neck pressure (BU), and to step forward upon pressure at the fetlock (SF).

Training sessions lasted 1 min, allowing for 3-5 repetitions per task and session. Training success was scored using a 6-point scale, with 0 being no response, 1 being moving slightly (less than 1cm) using strong pressure and 6 being the horse moving well using light pressure. The horses’ heart rate, behaviour and the time and pressure they needed to respond were also recorded.
In all cases, the horses’ performance improved significantly during both training schedules. The researchers found that after two weeks the horses trained daily performed slightly better than those trained every third day. However, when comparing their performance at the end of week one and at the end of the 28-day study period, the horses showed no significant difference in the time or pressure required to respond for any of the tasks, or in their learning progress.

Similarly, when comparing the learning progress of both groups after the same number of training sessions, there were no significant differences in performance.

The results of the study suggest that horses do not forget what they have learned if they are trained every third day rather than daily. Allowing horses a break of two days between training sessions rather than training them daily not only results in similar learning progress, but is a more efficient use of the trainers’ and the horses’ time.

Uta König von Borstel commented “While training every day is not necessarily a welfare concern, it is important to remember that the type of task trained is also relevant. If the horse is taught a strenuous physical task, they will need time out between training to allow their muscles to rest and repair.”

Co- author Andrew McLean, of Equitation Science International, Australia, added: “Overtraining is a problem for horses both mentally and physically. When horses are over-trained they start to show a range of mental issues including switching off, response lowering, aggression etc. They may also show physical ailments such as bone, tendon and muscle issues. So, the more we can actually reduce these stressors, the better.”

“The key is we are trying to turn action into habit. During the acquisition phase (the training phase) things can go wrong, so the more efficiently we achieve the habit phase, the better it is for both horse and rider.”

The team now hope to continue their research and investigate whether learning outcomes are affected by longer breaks between training and how learning is affected by training different tasks between the training sessions.

The Proceedings are available to download:
https://equitationscience.com/file_download/219/Proceedings+14th+ISES+Conference.pdf
Posted by Mark Andrews at 9:35 pm No comments: