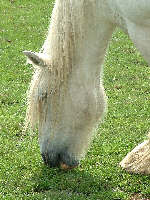 A new report provides owners with practical information on how to manage their pasture to reduce the risk of laminitis in horses and ponies.

The search for improved meat, milk and fibre production has led to the development of grasses containing high levels of non structural carbohydrates (NSC- sugar, starch, and fructan).

The non-structural carbohydrate content can increase dramatically if the pasture is exposed to extreme conditions - such as intense sunshine, drought and cold stress. Such pasture presents a high risk for horses and ponies susceptible to obesity, insulin resistance and laminitis.

But with good pasture management, these conditions can be minimised.

The report, entitled "Equine Laminitis - Managing pasture to reduce the risk", is written by US -based agronomist Kathryn Watts and Professor Chris Pollitt, Director of the Equine Laminitis Research Unit at the University of Queensland, and published by Australia's Rural Industries Research and Development Corporation (RIRDC). It outlines how horse owners can reduce the level and concentration of sugar, starch and fructan in their pastures. High levels of these carbohydrates can cause laminitis in horses and ponies.

According to Professor Pollitt, the report represents an important step forward in the understanding of pasture associated laminitis.

“While there are still significant gaps in our knowledge about laminitis, a source of great frustration to horse owners and veterinarians alike, we do know that what the horse or pony has eaten over the last few days, weeks or months may trigger laminitis,” Professor Pollitt said.

Equine Laminitis – Managing pasture to reduce the risk can be purchased in hard-copy for $A25 or downloaded (free) in PDF format. See: www.rirdc.gov.au
Posted by Mark Andrews at 12:46 am No comments:

Response of aged horses to vaccination

How does age affect the horse’s ability to respond to vaccination?

As with other body systems, the immune system undergoes age-related changes (known as "immunosenescence"). This may make the animal more prone to infections and autoimmune and neoplastic diseases.

A research team from the Atlantic Veterinary College, Prince Edward Island, Canada conducted a study to investigate the  specific systemic antibody response in horses by looking at how they responded to vaccination. They compared the response of young adult horses (aged 4 - 12 years) with aged horses (20years or older).


To investigate the primary immune response to an antigen that the horses would not have experienced before, they used rabies vaccine. Prince Edward Island is rabies-free and none of the horses had been vaccinated  previously for the disease.

They found that healthy aged horses vaccinated against rabies  showed a primary immune response similar to that of younger adults. However, by 6 months after vaccination the rabies antibody titres fell significantly in both age groups.

To test the anamnestic response (the rapid production of specific antibodies on renewed exposure to the antigen) they monitored the response to influenza vaccination. The anamnestic response was significantly reduced in the aged horses. Younger horses showed a significantly greater increase in two classes of anti-influenza antibody (IgGa and IgGb) after vaccination, compared with aged horses. This was despite the older horses having higher antibody levels at the start of the study.
Posted by Mark Andrews at 11:43 pm No comments: 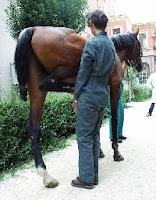 Horses suffering lameness due to bone spavin can show marked improvement following treatment with a tiludronate infusion, in combination with controlled exercise, according to recent research.

Bone spavin is a common cause of hindlimb lameness in horses and ponies. Often both hind legs are affected to some extent. Horses with straight or sickle-shaped hocks seem to be at greater risk of developing the condition.

There is little movement between the lower rows of bones in the hock. However these joints are subjected to considerable compressive forces. This can lead to degenerative changes within the bone and destruction of the joint cartilage

In a paper published in the Equine Veterinary Journal, Dr Martin Gough and others describe a double-blind, placebo-controlled trial involving 108 clinical cases of bone spavin.

The horses were treated at day zero with a single tiludronate infusion or a placebo and reassessed 60 days later after a period of controlled exercise.

Tiludronate is believed to work by alleviating the pain associated with abnormal bone lysis.

This research was funded by CEVA Animal Health, manufacturers of Tildren®. For more information visit the website:
www.tildren.com
Posted by Mark Andrews at 8:35 pm No comments:

Email ThisBlogThis!Share to TwitterShare to FacebookShare to Pinterest
Labels: lameness

What can be done to limit the number of horses dying as a result of racing injuries? It is hoped that  analysis of data on  fatal injuries will offer some suggestions.

At the third Welfare and Safety of the Racehorse Summit held at Keeneland, Kentucky on June 28 and 29, Dr. Tim Parkin, epidemiologist from the University of Glasgow’s Faculty of Veterinary Medicine, presented a preliminary analysis of racing fatalities in North America from data compiled in the Equine Injury Database (EID).

The analysis was based on data on Thoroughbred flat racing in the EID collected on 73 racetracks between November 1, 2008 and October 31, 2009  - a total of 378,864 starts. Horses that suffered a fatal injury during or immediately after a race, or that died later as a result of an injury that occurred during racing, were included in the analysis.

Among Dr Parkin's findings were:

No firm recommendations can be made at this stage. As the data contained in the EID continues to grow, some of the current statistical conclusions may change as a reflection of increased certainty associated with a larger data set.

“This preliminary analysis just scratches the surface,” said Parkin, who serves as a consultant on the Equine Injury Database. “As the number of starts recorded in the database continues to grow, more complex statistical analyses can focus upon multiple variables studied in concert to better understand the myriad of factors which may contribute to fatal and non-fatal injuries. In addition, differences that may not have achieved statistical significance after one year of data collection may do so with additional observations recorded in the database.”

“The work presented today represents a starting point, not a destination,” said Dr. Mary Scollay, equine medical director for the Kentucky Horse Racing Commission and a consultant on the Equine Injury Database. “This begins to answer the question of what is happening. The ‘how’ and ‘why’ remain to be determined.”

http://www.grayson-jockeyclub.org/newsimages/Summitcombinerelease.pdf
Posted by Mark Andrews at 9:42 pm No comments:

British horse riders are being urged to help map the distribution of ragwort in the UK.

The risk to horses of eating ragwort are widely known throughout the equine community. The plant contains poisons that cause progressive liver damage. Even small amounts eaten over time can lead to serious disease.

Despite that, every year the British Horse Society Welfare Department receives numerous reports of horses grazing in fields containing ragwort. “It does seem that the amount of ragwort is on the increase” Lee Hackett, Senior Executive of BHS Welfare,  writes in the latest issue of British Horse, the Society‘s magazine. “This suggests that current control measures aren’t working, but to change things we need evidence.”

In an effort to gain hard data on the extent of the problem, the BHS is organising a snapshot survey during its Ragwort Awareness Week.

Anyone who spots ragwort during the week of 12-18 July is asked to spend a couple of minutes filling in a  simple survey form, which will be available on the homepage of the BHS website.

It is only necessary to report ragwort that is growing in or near to fields being used for grazing horses, sheep or cattle.

Analysis of the data with mapping software  will show the areas where ragwort is most prevalent.
The number of animals grazing in ragwort-infested fields will also be calculated.

The intention is to repeat the survey in coming years so that trends in the distribution of the plant can be identified.

The BHS has 50 RagForks to give away, generously donated by the manufacturers, eazitools Ltd, who are sponsoring the survey. To be included in the draw for a RagFork you need to include your contact details on the survey form.

More details...
Posted by Mark Andrews at 7:00 am No comments:

Ten senior academics and equine vets from practice have come up with a novel way of raising money to help two worthy equine causes - the SPANA Disabled Riding Centre in Bamako, Mali and the BEVA Trust.

Led by Dr Derek Knottenbelt, they will undertake a 6 day CPD challenge, visiting all 7 British vet schools, to deliver  talks on a variety of subjects.

The lecturers will complete a  whistle-stop tour between the vet schools in convoy, on their motor bikes! They will cover over 1000 miles and deliver around 35 hours of lectures. The lectures are free - but donations are expected.

This marathon effort takes place at the end of July 2010. Places are limited, but anyone can contribute.

Click here to read more about it, or make a donation.
Posted by Mark Andrews at 9:12 pm No comments: