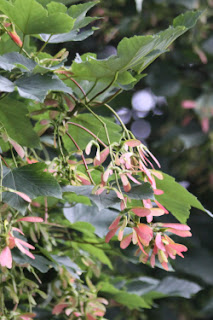 Research shows that the toxins responsible for Atypical Myopathy can pass to the mare’s milk. This can present a potential risk to the foal and may have human health implications in places where mare’s milk is drunk in preference to cow’s milk.

A case of atypical myopathy was identified in a mare and newborn foal in Germany. The mare had been grazing pasture close to Acer pseudoplatanus trees (sycamore or sycamore maple).

Johannes Sander and co-workers in Hannover, investigated the case.  A report of the work is published in the Journal of Veterinary Internal Medicine.

The authors analysed a sample of the mare's milk for hypoglycin A, the main toxin responsible for atypical myopathy, and other metabolites.

The researchers found low levels hypoglycin A and significant levels of metabolites (methylenecyclopropylformyl glycine and carnitine)in the milk from the affected mare. High levels of acylcarnitines, (indicators of the metabolic damage caused by atypical myopathy), were also found. The authors point out that the milk sample was collected two days after the mare had been removed from the contaminated pasture, and suggest that the levels of metabolites in the sample indicate that hypoglycine A levels would likely have been higher at the time the foal was nursing.

Methylenecyclopropylformyl glycine and carnitine were also detected in one of the six samples of commercial mares’ milk.

The authors conclude that maple toxins can pass through mare's milk.

They also warn that their findings have relevance in human health. Seeds and unripe fruit of plants such as ackee and lychee contain similar toxins, and may present a risk to breast fed children.

Posted by Mark Andrews at 11:56 am No comments:

Does not getting enough sleep affect horses’ memory? 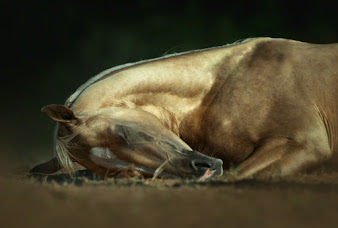 A recent study examined the effect of environmental factors on equine sleep stages, and whether this would influence cognitive performance during a memory task.

As a prey species, horses have evolved to cope with short periods of rapid eye movement (REM) sleep and are known for their ability to sleep, or at least doze, (Non-REM sleep, NREM) while standing up. They still have to lie down for REM sleep which is only possible during recumbency due to the lack of muscle tone that occurs during this sleep phase.

In research conducted at Aberystwyth University, Linda Greening and others investigated the effect of two different light regimes, and two different depths of straw bedding on sleep patterns in horses. They also looked at whether the differences affected the horses’ response to a memory test – basically remembering which of four buckets placed around an arena contained a feed reward.

In a report in Applied Animal Behaviour Science, the authors describe how ten adult riding school horses were randomly assigned to two equal-sized groups for the five-week experiment. Each group experienced a combination of one of two light conditions (lights on or off overnight), and one of two bedding depth treatments (straw bed 15 cm or 5cm deep) for six days.

The authors found that the duration of sleep stages was affected by both the depth of bedding and lighting conditions. Under sub-optimal conditions, horses tended to spend significantly less time recumbent for both NREM and REM sleep. This was compensated for by increased time in standing NREM sleep.

Sub-optimal lighting and bedding conditions did not have a significant effect on performance during the spatial memory test. The authors suggest that, “a more cognitively demanding task may be required to differentiate the performance-related consequences of different levels of sleep duration and quality.”

Posted by Mark Andrews at 12:30 am No comments: 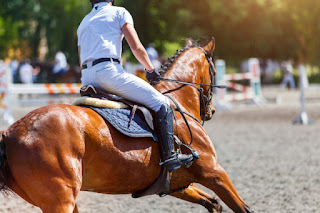 Irish horse owners of all levels and disciplines are invited to take part in a survey to help research sport horse health.
Sinead Devine, Assistant Professor in Equine Clinical Studies at UCD School of Veterinary Medicine is currently undertaking a PhD on Sport Horse Health in Ireland.
Her interest in Sport horse health comes from over 20 years working as an equine vet in Ireland and the US. She is also a 3* FEI Veterinary Delegate for showjumping, eventing & reining, and 2*endurance.
Horse owners of all levels and disciplines are encouraged to take part in the survey. The results will help direct further research for the Irish Equine Industry. Survey questions will include common disease conditions and their impact.
The survey should take less than 10 minutes to complete. Responses are anonymous and participants will not be identified by their responses.
For more details, and to take part in the survey go to:
http://bit.ly/horseownersurvey
Posted by Mark Andrews at 5:03 pm No comments:

Email ThisBlogThis!Share to TwitterShare to FacebookShare to Pinterest
Labels: survey 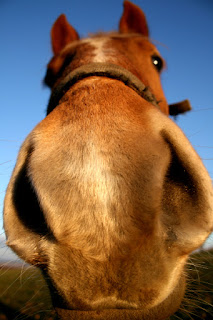 Agnieszka Sabiniewicza and co-workers at the Institute of Psychology, University of Wrocław, looked at whether body odours collected from humans in a state of fear or of happiness produced different behavioural responses in horses that were exposed to them.

The research team collected body odour samples from ten fearful or happy humans. They achieved this by showing them a fear-inducing horror video or a cartoon.

Prior to viewing the films, the human subjects washed in perfume-free detergent and had avoided smoking, alcohol, odorous food, or hard exercise for a couple of days. While watching the films the “odour donors” had sterile pads in their armpits. The pads were subsequently collected and frozen.

Twenty-one adult Thoroughbred and Arabian horses took part in the study. Their response to the smell of fear, or happiness, or a control (no odour) was recorded.

Two people, one known to the horse, the other unknown, stood quietly in different corners of the stable. They made no attempt to interact with the horse. The investigators then presented the horse with a pole to which odour pads were attached (pads from four fearful or four happy people were combined to reduce the risk of individual variation between odour donors) and recorded the horse’s response.

The researchers found that horses showed different behaviours in response to odours from fearful or happy humans.

Horses lifted their heads significantly more frequently and for longer in response to the fear odour and the control, compared to the happiness odour.

The researchers conclude that, using human body odour as the only source of information about a human’s emotion is enough to induce some differential behaviour in horses.

Posted by Mark Andrews at 3:53 pm No comments:

Does oxytocin influence friendliness in horses? 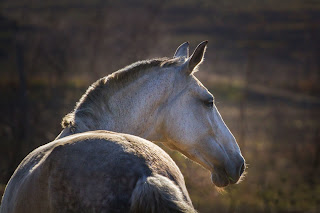 Recent research suggests docility and friendliness in Thoroughbred horses might be related to blood oxytocin concentration.

Oxytocin, vasopressin (AVP) and serotonin are hormones and neurotransmitters that play a role in shaping social behaviours, such as aggression and social recognition.

In a study performed at Sangju International Equestrian Center, Geumhui Lee and Minjung Yoon measured the levels of the three hormones in the blood of a varied group of adult horses.

They assessed the influence of breed, sex, and age on the concentration of each hormone. They also looked to see if there was any relationship between their concentration and docility and friendliness of the horses.  A report of the work is published in the journal Domestic Animal Endocrinology.

They conclude that oxytocin concentration may be related to docility and friendship in Thoroughbred horses.

Association of plasma concentrations of oxytocin, vasopressin, and serotonin with docility and friendliness of horses

Posted by Mark Andrews at 1:00 pm No comments: