New Codes of Practice for 2014

Codes of Practice for the 2014 equine breeding season have been published by the Horserace Betting Levy Board. The Codes set out voluntary recommendations to help breeders, in conjunction with their veterinary surgeons, to prevent and control specific diseases in all breeds of horse and pony. Information can be found on Contagious Equine Metritis, Equine Viral Arteritis, Equine Herpesvirus, Equine Coital Exanthema, Equine Infectious Anaemia, Dourine and Strangles.

The sections on Equine Herpesvirus and Strangles have been updated and expanded for 2014. For more details see:

Posted by Mark Andrews at 7:48 pm No comments:

Australian vets and scientists from CSIRO (Commonwealth Scientific and Industrial Research Organisation)  have given a surprise Christmas gift to ten-year old mare, Holly, who suffers from chronic laminitis.

She recently took the first steps in her new 3D printed titanium shoes that were custom designed to fit her foot. 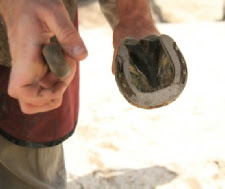 The team of 3D printing experts worked with horse podiatrists to scan Holly's feet and design the “horse-thotic” which aims to support the foot and encourage it to heal, whilst making Holly comfortable.

Holly has had laminitis for three years. Horse vet and farrier, Dr Luke Wells-Smith from the Equine Podiatry and Lameness Centre, said his team saw the 3D printed shoe CSIRO built for a race horse earlier this year and started to think about using 3D printing to rehabilitate lame horses.

"The new shoes will work to redistribute weight away from the painful areas of the laminitic foot and give Holly, and horses like her, the chance to recover," he said.

"Many attempts have been made in the past to cure laminitis but it’s the 3D scanning and design part of this process that is so exciting to us.

"Christmas is looking a lot merrier for Holly this year. She should be walking normally and without pain in just a few weeks," said Luke.

CSIRO's 3D printing expert, John Barnes, said scanning the hoof would allow them to manufacture a shoe that is the ‘perfect fit’ for these complicated foot diseases, giving the horse the best possible chance for rehabilitation," he said.

"We know that 3D printing has the potential to create so many advanced biomedical products, but rehabilitation of horses has been a completely new area of work for CSIRO.

"We’re glad that this technology is opening so many doors and is now helping to aid the rehab process for these animals and get them walking comfortably again," he said.

Posted by Mark Andrews at 7:43 pm No comments:

Ensuring that mares have access to roughage throughout the day and night has beneficial effects on reproductive efficacy according to a recent report.

Horses have evolved as "trickle feeders" and are adapted to eating little and often. Modern management methods frequently interfere with this natural feeding routine, and have been implicated in causing welfare problems and  health issues such as gastric ulcers and colic.

Now evidence has emerged to suggest that restricting the availability of ro ughageto just part of the day can be detrimental to breeding performance.

The study, “Temporal feeding pattern may influence reproduction efficiency, the example of breeding mares” by Haifa Benhajali and colleagues has been published in the journal PLOS One.

One hundred Arab breeding mares on the national breeding facility of Sidi Thabet, near Tunis, in Tunisia, were included in the study. They were randomly divided into two groups whose management differed only in the timing of availability of roughage. Mares were housed individually except for a period of six hours when they were turned out into a paddock. They had free access to water, a small amount of cut grass was given at midday, and 4kg of barley was fed overnight.

The researchers found a significant difference between the two treatment groups. Those receiving hay throughout the day had fewer oestrus abnormalities and higher fertility. The conception rate in the CF mares was 81% compared with 55% in the SFP mares.

They conclude that “temporal patterns of feeding may be a major and underestimated factor in breeding.”

How risky is medicating joints?

Injecting medication directly into the joint is a common procedure for treating injuries in competition horses. It carries a risk of introducing infection into the joint. However, a recent report suggests that with adequate preparation serious consequences are uncommon.

Lewis Smith and colleagues examined clinical records of all horses given intra-articular injections by nine ambulatory veterinary surgeons over a five year period. The vets were based at a specialist equine practice in Newmarket England dealing mainly with Thoroughbred racehorses. Data relating to intra-articular injections for diagnostic purposes were not included in the study.

The site of injection was prepared using standard aseptic technique, but usually the hair was not clipped.  All injections were made using scrupulous aseptic injection technique.

During the study period, 9456 injections were performed, including corticosteroids (92.3%) antibiotic (amikacin)( 94.8%) and polysulphated glycosaminoglycans (PSGAGs)(0.15%).

Twelve horses developed complications after medication. Four of those developed joint sepsis, but all returned to work after having the joint flushed.

Analysis of the data showed that administration of PSGAGs into the joint, was significantly associated with joint infection. Overall, intrasynovial medications that included amikacin were less likely to develop joint sepsis, but the difference was not significant if the PSGAGs were excluded from the analysis.

Posted by Mark Andrews at 11:01 pm No comments: