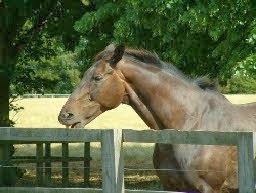 Crib-biting, (or cribbing) is a stereotypic behaviour in which the horse grasps a fixed object with its incisor teeth, and draws air into the cranial oesophagus, before expelling it with a characteristic grunt.

Various factors have been suggested as a cause for the behaviour including gastric discomfort and lack of  sufficient environmental stimulation. But is there a genetic component?

Scientists at the University of Helsinki, Finland compared crib-biting and non-crib-biting horses, looking specifically at genes known or suspected to be related to stereotypic behaviours.

Two groups of horses were compared. Horses in the crib-biting group had started to display the behaviour at any early age, and had done so for at least a year. They tended to crib-bite after feeding or when stressed.

Non-crib-biting (control)  horses were all over ten years old and had never been seen to crib-bite.

The researchers analysed the candidate genes in both groups and compared the allele frequencies between the cases and controls for each breed separately. They could find no evidence of an association at any of the tested loci.

They conclude: “These results suggest that the previously known stereotypic genes are not major risk factors for crib-biting in horses.” They suggest that further whole genome studies involving larger groups of crib-biting and non-crib-biting horses are required.

More information
Posted by Mark Andrews at 12:32 am No comments:

Collaboration between scientists in Denmark and the United States has led to the development of a diagnostic test that promises to help identify horses infected with the larval stages of the large strongyle Strongylus vulgaris. The larvae  migrate in the arteries that supply the large intestines and may cause blockage of the arteries and intestinal infarctions.

The result of the research is a serum enzyme-linked immunosorbent assay (ELISA) which has been validated for detecting migrating larvae in the bloodstream of horses. The test detects antibodies against a polypeptide in the excretory/secretory fraction of the migrating larvae, named SvSXP.

Further work using the test showed that foals receive colostral antibodies from the mare which may persist for up to 13 weeks of age. Foals start being able to mount their own immune response to the parasites from about three months of age, depending on the grazing conditions and the stage at which they were exposed to the parasites.

In younger foals, the serum ELISA does not give reliable diagnostic information despite heavy infections. The researchers found that young foals can be heavily infected without showing positive ELISA test results.

They also found that higher infection levels tend to be associated with higher ELISA levels.

Once they had started producing antibodies, foals continued to maintain high ELISA levels throughout the study. There was a tendency for the ELISA levels to decline gradually as the numbers of migrating larvae declined and adult intestinal worm burdens increased.

The scientists suggest that further research into the time taken for antibody levels to decline after effective anthelmintic treatment would be very useful.

If the test becomes commercially available it will be a useful addition to the armoury  of diagnostic tests for investigating parasitic disease in horses.

Read more at equinescienceupdate.com
Posted by Mark Andrews at 12:27 am No comments:

Sudden death in athletic horses is a rare but distressing event. By definition, affected horses were, moments before, perfectly fit and healthy. The absence of any premonitory signs  complicates the task of identifying causative factors.

Recently Catriona Lyle led a multicentre study in an attempt to gain a better understanding of the problem and find ways to reduce the risk of sudden death occurring. The work,  funded by a Horserace Betting Levy Board scholarship, was undertaken at the Royal (Dick) School of Veterinary Studies in Edinburgh.

Lyle coordinated the study drawing information from racecourses in North America, Australia, Japan and Hong Kong. Post-mortem data from 284 cases over 20 years were studied. In the UK post-mortem examinations are not always carried out in cases of sudden death and so gaining access to these international records was essential.

She explains:“The study has shown that the cause of death can be quite variable, ranging from severe lung bleeding to a pelvic fracture that causes massive bleeding into the abdomen. But in approximately half the cases I studied, the pathologist was uncertain as to the cause of death. The most likely explanation for death in these situations is cardiac rhythm irregularities, but this is very difficult to prove.”

Following her analysis of these international data, Lyle then looked at cases of sudden death in British racehorses. She found that sudden death of horses during races is a very rare event. Over a seven year period, in 705,914 race starts, there were 201 sudden deaths on British racecourses. The same syndrome is known to occur in eventing, show jumping and hunting but statistics have not been established in these sports.

In the UK study, she found that increasing age is a risk factor, steeplechases posed more of a risk than flat races and racing during the summer was associated with a greater risk of sudden death. However, this should be put in the context that, on average, steeplechasers are older than hurdlers or Flat horses. Horses that had raced within the last 60 days were less likely to be affected.

Read more at equinescienceupdate.com
Posted by Mark Andrews at 12:06 am No comments: