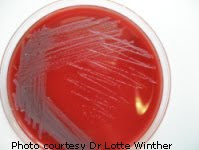 Danish Researchers have identified a new cause of respiratory disease in horses. They found the bacterium Stenotrophomonas maltophilia in samples collected from horses with chronic lower airway disease.

Stenotrophomonas maltophilia, a Gram-negative bacterium, has been found increasingly in human medicine, especially in patients with impaired immune systems. Until recently the organism has been recorded only rarely in animals.

In a paper to be published in The Veterinary Journal, Lotte Winther, a PhD student in the Department of Large Animal Sciences at the University of Copenhagen, and colleagues present data from seven horses with respiratory disease associated with S. maltophilia infection.

All cases had a history of chronic coughing. Endoscopic examination revealed copious mucopurulent exudate in the lower trachea. Culture of the tracheal exudate produced grey, slow-growing colonies, which were identified as S. maltophilia by both culture and DNA testing.

Many antibiotics commonly used to treat equine respiratory infections were not effective against S. maltophilia.

The findings suggest that S. maltophilia can act as a respiratory pathogen. The researchers advise that the organism be included in the differential diagnosis of horses with respiratory disease associated with copious mucopurulent exudate.