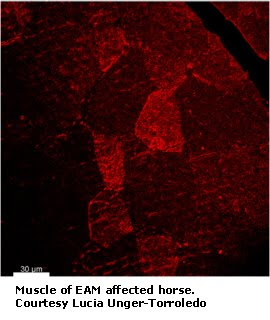 Researchers at the University of Bern, Switzerland, have identified a possible cause for the often fatal disease atypical myopathy. They found evidence to implicate a toxin produced by the bacterium Clostridium sordellii. The toxin is known to cause severe muscle damage in mice.

The researchers examined heart and skeletal muscle samples from horses affected with Atypical Myopathy using transmission electron microscopy. They found that the changes that were present were similar to those found in mice affected by the toxin.

They also used immuno histochemistry staining techniques to show that the lethal toxin of Clostridium sordellii was present in the muscle fibres of affected animals. Antibodies from horses with Equine Atypical Myopathy and antibodies to the lethal toxin of Clostridium sordellii both bound to muscle fibres taken from horses affected with EAM.

In contrast, neither of the antibodies attached to normal horse muscle fibres or to muscle fibres taken from horses with other types of muscle disease.

The scientists concluded that there is evidence that the lethal toxin of Clostridium sordellii plays a role, either as a trigger, or even as a lethal factor, in Atypical Myopathy.

Read more at Equine Science Update.co.uk
Posted by Mark Andrews at 10:09 am