Benefits of exercise on insulin sensitivity

Unless dietary restriction below maintenance energy requirements is also employed, moderate exercise on its own is not enough to counter insulin resistance in obese or overweight horses, according to Dr Rebecca Carter and colleagues at Virginia Tech.

They examined the effects of exercise training alone on overweight or obese, insulin-resistant horses. Feed intake was limited during the study to 100% of maintenance energy requirements. 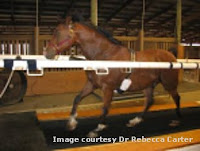 Eight horses, all either overweight or obese, followed a low intensity exercise program for 4 weeks followed by higher intensity exercise for a further 4 weeks. Finally they had two weeks without exercise (detraining). A control group of four horses received no structured exercise.

The researchers found no significant difference in glucose or fat metabolism or insulin sensitivity between the exercised and control groups throughout the study.

Dr Carter comments "even though our study did not show long-term training effects of exercise, there still are probably improvements in insulin sensitivity during and shortly after an exercise session. Therefore, ROUTINE exercise (every day) may be beneficial for improving insulin sensitivity."