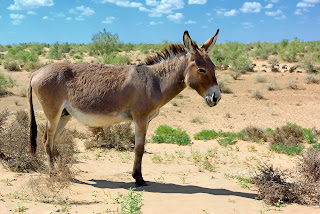 A possible new tick repellent has been isolated from donkey sebum (the oily substance secreted by sebaceous glands to keep skin moisturised.)

Amblyomma sculptum, a species of tick found in South America, feeds on animals and humans. It is an important vector of Rickettsia rickettsii, the agent responsible for Brazilian Spotted Fever (Rocky Mountain Spotted Fever in USA) - the most lethal tick-borne pathogen affecting humans.

The horse is a common host for the tick, and although horses may have antibodies to R rickettsii, clinical signs of disease are rare.

Unlike horses, donkeys are resistant to the tick. Researchers at the Federal University of Goiás, Brazil, working with colleagues at the Rothamsted Research in the United Kingdom have been investigating whether this could be due to differences in the secretions of the sebaceous glands in the skin of horses and donkeys.

The researchers collected sebum from donkeys and horses and isolated the volatile compounds it contained. They found five compounds, present in differing proportions in horses and donkeys. However, one compound, ((E)-2-octenal), was found only in donkey extracts and not in horse extracts.

Further tests were carried out with this compound using a Y-tube olfactometer, a technique commonly used in chemical ecology research. A. sculptum nymphs were given the choice between two odour sources to test behavioural preferences,

The research team found that the dry sebum extracts and the five compounds identified in both horses and donkeys had neither attractant nor repellent effects.

Only (E)-2-octenal, the compound found only in donkey sebum, showed a repellent effect. More nymphs preferred the arm containing the solvent control than the test arm.

The researchers report than “even a combination of ammonia (which attracts ticks) and (E)-2-octenal at 0.25 M also resulted in preference for the control arm.”

The authors suggest that (E)-2-octenal could be used as a repellent to interfere with ticks locating their host and to help reduce A. sculptum numbers on animal and human hosts.

I would like to know how the donkey sebum is taken from their skin.