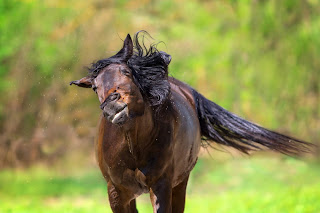 Good biosecurity is vital for limiting the spread of contagious diseases like strangles. Caused by Streptococcus equi subspecies equi (S. equi), strangles spreads readily from horse to horse and by indirect transmission on items such as clothes, tack, and buckets.

Stopping an outbreak requires affected horses to be isolated to prevent spread to
susceptible animals. Measures are also needed to prevent indirect transmission, such as using
separate equipment and clothing for handling affected and unaffected horses, and disinfecting anything that comes in contact with an infected animal.

One possible source of indirect transmission, which may prove more difficult to do anything about, was highlighted by recent research.

Dr Nic Pusterla, professor in the Department of Medicine and Epidemiology, at the School of Veterinary Medicine, University of California, Davis, was lead author of a short communication published in the journal Medical and Veterinary Entomology.

The study set out to see if S. equi could be found in face flies on a farm with a confirmed outbreak of strangles.

The authors conclude: “The results may implicate the presence of face flies as a risk factor for the transmission of S. equi and highlight the need to institute proper husbandry measures, biosecurity protocols and fly control in order to reduce the potential for infection in at-risk horses.”