Girthiness. The moment you start to tighten the girth, your normally placid and well-mannered horse 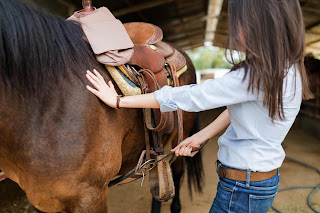 It’s a frustrating and challenging problem to deal with. Saddle fit, back pain, gastric ulcers and innumerable other causes have been implicated.

A recent retrospective study looked at the clinical signs and final diagnosis of horses referred to a university clinic for girthiness.

Esther Millares-Ramirez and Sonia S Le Jeune went back through the records of horses examined at University of California, Davis between 2004 and 2012. During that time 37 horses had been referred for investigation of girthing problems.

The research has been published in the Journal of Equine Veterinary Science.

Not all horses were subjected to gastroscopic examination, but of those that were, 92% had gastric ulcers.

The authors conclude that determining the cause of girthiness remains a challenge, but they recommend that as gastric ulcers were commonly involved, investigation should include gastroscopy.