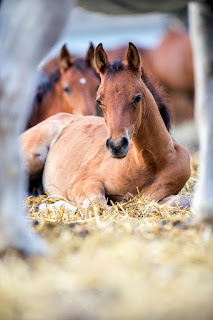 Strategically placed microchip readers could be used to monitor body temperature, a recent study has shown.

Monitoring rectal temperature is a useful technique to identify early signs of respiratory disease. However, it is labour-intensive and time consuming, and also presents a significant risk to the operator, especially in young stock.

Some microchips, as well as carrying an identification code, can measure body temperature.
A study by Juliette Auclair-Ronzaud and others at the Institut français du cheval et de l’équitation (IFCE), Station Expérimentale de la Valade, Chamberet, France assessed the value of using microchip readers embedded in the concrete of water troughs to read temperature-sensitive microchips implanted in the necks of foals and yearlings.

The study followed 43 Anglo-Arabian foals over two consecutive winter periods starting when the were 4-6 months old. The study ran from December to February when the foals were housed in straw-bedded yards with access to outdoor paddocks.

The research team also monitored temperatures of the male foals around the time they were castrated (in March). They also checked the microchip temperature reading correlated with the rectal temperature – reading both temperatures simultaneously in 79 foals.

Over 100,000 readings were taken. No individual foal animal was identified as sick during the study.

Males on average had temperatures slightly higher (+0.26˚C on average) than females. This could not be explained by any difference in conditions in the pens, (males were kept in one pen, and females in two other pens), neither did the research team notice any difference in activity between the groups of foals.

A full report of the research is published in the Journal of Equine Veterinary Science. The authors suggest that this non-invasive technique does not require extra-handling and will allow a better monitoring of normal body temperature.