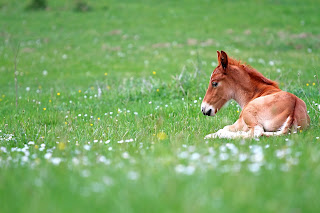 A possible new treatment for foal pneumonia that doesn’t risk causing multi-drug resistance has been discovered.  Researchers at Texas A&M University and the University of Georgia found that gallium maltolate (GaM), a semi-metal compound with antimicrobial and anti-inflammatory properties, could be a viable alternative to overprescribed antibiotics.


The research, funded by the Morris Animal Foundation, has been published in the Nature journal Scientific Reports.

Pneumonia is a leading cause of disease and death in foals and there is currently no effective vaccine licensed. The bacterium Rhodococcus equi (R. equi), a bacterium that occurs naturally in soil, is implicated in the most severe cases in horses.

Unfortunately, current methods of screening for R. equi are imprecise and so many foals are treated with antibiotics, even though they would not have developed pneumonia. A combination of antibiotics is commonly used, such as azithromycin (a macrolide antimicrobial, which important for human use) and rifampin.

"While that treatment strategy saves lives in the short term, it's really driving this resistance problem because for every one foal that needs treatment, you treat several foals that don't need treatment," said Dr. Noah Cohen, the Patsy Link Chair in Equine Research at Texas A&M University, a primary investigator of the study, along with his colleague Steeve Giguère (deceased). "For the sake of foals, we want to offer veterinarians a better, non-traditional option."

For the study, the team screened 57 foals from four farms in central Kentucky for subclinical pneumonia, then divided the foals into three equal groups. Two groups contained foals with subclinical pneumonia, meaning ultrasound scans found lesions on their lungs but the foals had no clinical signs. All foals lived on farms with positive cases of R. equi pneumonia that year. Those groups were given either a combination of azithromycin and rifampin (MaR) or GaM for two weeks.
The third group served as a control group and was made up of healthy foals that were the same age as the subclinically affected foals in the two treatment groups. They were monitored and not given any treatment.

After two weeks, researchers analysed faecal samples from each foal. DNA tests revealed that the MaR treated group had an increase in both the number and diversity of antibiotic-resistant genes in the bacteria. Most alarming was the discovery that the bacteria were resistant to multiple drugs and antibiotics. The GaM treated and control groups showed no change in the number or diversity of resistance genes, a positive finding.

The team also experimentally infected soil plots with resistant and non-resistant strains of R. equi to see how foals might contaminate their environment with their excrement that can contain unabsorbed and metabolized antibiotics. MaR tended to reduce the number of bacteria in a plot's soil but increase the proportion that were resistant.

Dr. Cohen said one of his team's next steps is to test the effectiveness of GaM on foals that are clinically infected with R. equi.

"The widespread use of antibiotics has consequences and we really need to be prudent in prescribing them," said Dr. Janet Patterson-Kane, Morris Animal Foundation Chief Scientific Officer. "Gallium maltonate may be an excellent alternative and we hope, if proven fully effective, that it could be put into regular use."