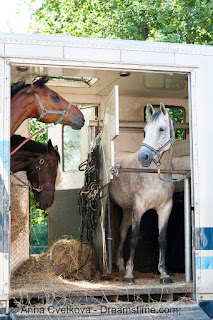 Traveling facing backwards and in wider bays may improve horse welfare during transport, according to recent research.

A study(1) conducted by Barbara Padalino and Sharanne Raidal at Charles Sturt University, New South Wales, Australia, compared horses being transported for 12 hours with those confined in stocks for the same length of time.

For the first part of the study, mares were confined to breeding stocks. During the transportation part, mares were transported in a 15-horse trailer, facing either backwards or forwards, and in wide (112cm) or narrow (76cm) bays.

The researchers found that behaviours relating to stress and balance occurred more frequently in transported horses than in confined horses, and that horses transported facing backwards and in a wider bay (112cm wide rather than 76cm) showed less balance-related behaviour.

They report that, in particular, horses travelling in a single bay showed a higher frequency of behavioural events (both related to stress and balance) and, after the journey, demonstrated increases in cortisol, neutrophils and WBC that were not observed in horses travelling in wider bays.

They found that behaviour was more sensitive than haematology, biochemistry or plasma cortisol for assessing the emotional status of the animals in transit. Consequently, they recommend the use of video-cameras for observing the behaviour of horses during transportation.

In a related study(2), Padalino  and colleagues looked at the effect of transportation on gastric ulceration. Endoscopic examination of the stomach before and after transportation was carried out as before, and in 12 horses samples of gastric fluid were collected regularly during transportation and confinement.

The researchers found that travel induced or exacerbated ulceration of the squamous mucosa in most horses. This was particularly so in horses that had been fasted for 12 hours before travel. Surprisingly, the pH of the gastric fluid was higher (less acidic) in the horses when transported than when they were confined. They suggest that this may be due to reflux of less acidic factors, such as short‐chain fatty acids, and duodenal bile salts, which may contribute to gastric squamous mucosal damage.

The researchers recommend that horses should have access to feed until the time of departure, and potentially during transport, to limit contact between the squamous mucosa and gastric secretions or small intestinal reflux.