A good memory for a face 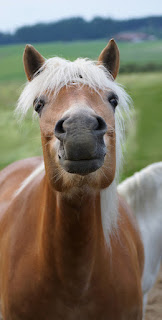 Horses recognise other horses using a combination of senses such as sight, sound, and smell. They can also recognise their human carers. But how do they do it? Can they recognise a photograph of someone they know? And if so, can they remember someone they last saw months ago?

Research at the French National Research Institute for Agriculture, Food and Environment (INRA) investigated whether horses could differentiate between photographs of familiar and unfamiliar faces.

The study, led by Lea Lanslade, found that mares could recognise a photograph of their keeper that they had last seen six months previously. A full report of the work is published in Science Reports.

Eleven three-year-old female Welsh breed horses, born and raised on INRA premises, were enrolled in the study. They were kept in a group at pasture. During bad weather conditions they lived in a large stall with straw bedding. They had free access to hay and water.

Horses were trained to choose between a familiar face and a unknown face shown on a computer screen (by receiving a reward when they touched the familiar face with their nose).

Once they had been trained, the mares were asked to choose between photographs of the keepers (past or present) and random unknown faces. The study was conducted only on female horses and the photographs presented were also only of women.

What the researchers found was that horses touched the faces of keepers significantly more than would be expected by chance, whether it was their current keeper or one they had not seen for six months.

The team conclude that the horses in the study were able to identify faces and did not appear to have any difficulty recognising a photograph of a person they knew.

Indeed, they point out that horses appear to have a good memory for faces, as they could recognise a photograph of someone they had not seen for six months.

Anecdotally, I went back to a racing stable I had worked at 10+ years after leaving, I went to see my favourite horse(very retired) who was there for summer, she remembered me, evidence for this is the fact she was grumpy cow but was not grumpy with me, anyway the trainer asked me to de-burr her mane as she clearly remembered me and let me do it where others were given a hard time.