A study involving Arabian horses from 12 countries found that some populations maintained more genetic diversity and that the breed did not contribute genetically to the modern-day Thoroughbred, contrary to popular thought. 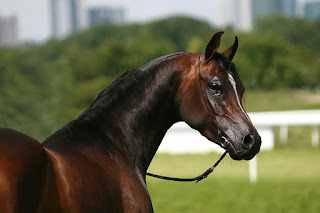 Other than the horse’s location and whether it was used for endurance, racing or showing, the samples were anonymised for data analysis purposes.

“The Arabian horse has a special mystique due to the long-recorded history of the breed,” Brooks said. “Arabian horse breeders, in particular, know their horse’s bloodlines many generations back. What we found was that in the area where this breed originates – likely the near East region, but we don’t know exactly – there’s a healthy level of diversity. This is particularly evident in populations from Bahrain and Syria, which suggests these are some pretty old populations.”

The Arabian is prized for characteristics like heat tolerance and endurance, as well as its unique appearance, with a dish-shaped facial profile, wide-set eyes, an arched neck and a high tail carriage. It has been exported from its ancestral homeland for centuries, with some modern lineages drawn strictly from these smaller genetic pools, giving the breed a reputation for inbred disorders. While this was true for some groups they tested, Brooks noted, they also found remarkable diversity when considering the breed as a whole.

Brooks contrasted the discovery of more diverse populations with the samples they received from racing Arabians. Another longstanding myth says that the Arabian contributed genetically to the modern Thoroughbred, but the racing Arabians’ DNA told a different story. The research team found little influence of the Arabian in the modern Thoroughbred’s DNA

“What we found in these samples was not that much Arabian ancestry was part of the Thoroughbred line, but the opposite: that Thoroughbred DNA exists in most of the modern racing Arabian lines, indicating a more recent interbreeding within this group,” Brooks said. “I can’t speculate on the how or why, but this is clearly the story the DNA is telling us.”

Another implication of this study, Brooks said, is the potential to identify the genetic regions that determine some of the Arabian’s unique traits, like their facial profile. This could be expanded to identify the marker for other horse breeds’ head shapes, for example.

“An exceptional aspect of this project was the wonderful level of open collaboration and sharing of resources by veterinary geneticists, equine scientists, and horsemen from around the world,” Antczak said. “It was a great pleasure to conduct this global study for the benefit of the horse.”

I was very interested to receive my update, as usual, and found the study of TB/Arabian genes enlightening. Datewise, I don't quite see how the TB could have influenced the early Arabian, but it could certainly have been introduced (against the 'law') into modern Arabian racing iines. Decades ago, when I first became aware of and interested in Arabians, I obtained, at great expense for a young girl freshly into her first job, copies of The Authentic Arabian Horse and Thoroughbred Racing Stock by Lady Wentworth - a redoubtable character whose parents, Lady Anne Blunt and Wilfred Scawen Blunt, apparently reintroduced the Arabian to England roughly a hundred years ago plus, and founded the famous Crabbet Park Stud.

When the stud came to Lady Wentworth herself, her ambition was to breed a 'true to type' Arabian of greater height. One of her main and most famous stallions, Indian Magic, was said by an 'insider' to have been by a grey Epsom Derby winner out of an Arabian mare and she falsified his papers to get him accepted, and so to introduce more height into her stock. The insider told me that this was not her only misdemeanour. Crabbet-bred horses were, on the whole, certainly taller than those from other studs.

The Arabs of old, and maybe today's too, divided their stock into 'strains' (five, if I remember correctly) within what they regarded as a pure breed (although apparently their word could never be taken as fact as to a particular horse's breeding). The strains had a different phenotype and presumably genotype from each other, the racing strain being the Managhi/Muniqui strain. The three 'founding father' Arabians seem to have looked quite different: the Byerley Turk looked like a Turcoman/Turkmene to me, the Darley Arabian more like a conventional Arabian and the Godolphin Arabian was often called the Godolphin Barb, and looked like one.

I once owned a much-loved TB mare whom I bought to save her from the knackers and we had three happy years together in her old age. She was the image of a Turkmene/Akhal Teke type.

Of course, to Arabian purists today, it is still sacrilege to say that Arabians are not 'pure' or to claim that Arabs had little influence on modern Thoroughbreds. I understand that the most influential of the founding fathers in today's TBs is the Darley Arabian, yet none of them, with the diversity of phenotype in their breed, look particularly traditionally Arabian to me. Also, those who claim this seem to look only at the male line whereas there could be equal, different influences in the female ancestors.