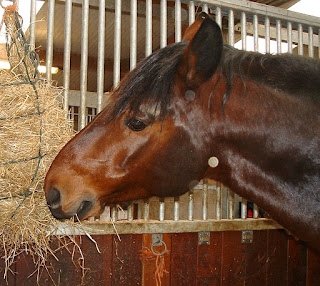 Free faecal liquid (FFL) is not the same as diarrhoea. Unlike diarrhoea, where horses pass consistently loose faeces, in FFL they pass solid droppings, followed or preceded by a separate liquid phase.

Affected horses are usually otherwise healthy, but the liquid contaminates the hind legs and tail, and may lead to inflammation of the skin and attract flies.

The underlying cause is of FFL not known, although many possible factors have been suggested, such as:

A study to investigate some of these factors has been conducted at the Swedish University of Agricultural Sciences, in Uppsala.  Katrin Lindroth and colleagues used a web-based survey to look into the occurrence of FFL in Sweden and Norway, particularly in horses fed wrapped forages.

Owners were asked if a change in diet influenced the occurrence of FFL.

Interestingly the study also found that horses with FFL were reported to have a higher incidence of a previous history of colic compared to reports from other horse populations.

A report of the work has been published in the journal Animals (Basel).

The authors conclude: “Many, but not all horses in this study were reported to show less separation of solid and liquid phases in their faeces when changing from wrapped forages to hay, pasture or another batch of wrapped forage. “

They suggest that “further studies should include detailed data on individual horse factors including gastrointestinal diseases as well as feeding strategies, in order to increase the chance of finding causes of FFL.”

finally, I have found some one who wants to look in to this problem. I have found that feeding softer less stalky hay and hay cut later in the season. since I have a mare that cannot eat grass(I am trying to sort the grazing with minerals and lime) in the hope that she will be able to have at least some grazing, all be it very monitered.
although she has had laminitus once , she has always struggled with ffl, from a young filly.
I look forward to any more information you can give.