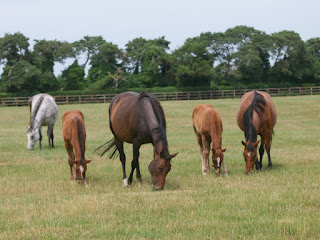 With the increasing problem of anthelmintic resistance, we are urged to adopt a more sustainable approach to deworming.

A study led by Martin Nielsen monitored egg count levels, bodyweight and equine health in mares and foals under different parasite control regimes. A report of the work has been published in the Equine Veterinary Journal.

Ninety-three foals and ninety-nine mares at two Standardbred and two Thoroughbred stud farms were included in the study. Faecal samples and bodyweight were monitored monthly, and any occurrence of colic or diarrhoea was recorded.

The foals were divided into two groups and wormed either monthly or on two occasions at two and five months of age. Mares were split into three groups and wormed monthly, twice a year, or when faecal egg counts exceeded 300 eggs per gram.

The research showed that, compared to foals treated monthly, foals dewormed at two and five months old had significantly higher strongyle and ascarid faecal egg counts. Despite that, there was no significant difference in body weight between the two groups.

Mares wormed twice a year weighed less than those in either of the other groups. However, there was no significant difference in faecal egg counts between the groups.

The authors conclude that it was possible to reduce the frequency of anthelmintic treatment from traditional high intensity regimes without apparent negative health consequences.

Martin Nielsen has published a video summary of the work, which is available at: