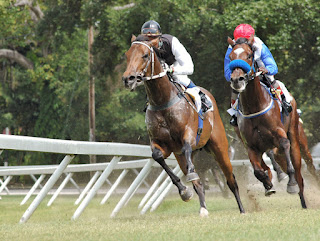 Experts from the University of Nottingham have found that the sex of a jockey doesn’t influence any
aspect of racehorse physiology and performance.

Currently, more than 90% of jockeys, in most racing nations, are men. This is likely due to an unconscious bias toward male jockeys being, on average, physically ‘stronger’, able to push horses harder, and thus performing better in races than female jockeys. Studies assessing the effect of the sex of a rider on racehorse performance and physiology during training have not been reported, mostly due to the lack of available data for female participants within the sport.

This decade has seen a marked increase in participation of female jockeys at an elite level in the racing industry. Irish jockey Rachael Blackmore made history in 2021 by winning several high-profile races, and has gone on to win the Cheltenham Gold Cup this year.

In racing, a competitive advantage may lie in the ability of a jockey to control the horse, and/or less weight carried by the horse (i.e. weight of jockey plus saddle). Hence, jockeys are weighed out before, and weighed in after, races. Certain races are ‘handicapped’ by weight carried and according to predicted ability.

If all other factors were equal, would a racehorse working-out at racing speed perform any differently when ridden by either a female or male jockey? Would that racehorse be more or less likely to win a race?

Researchers from the School of Veterinary Medicine and Science at the University of Nottingham, worked to answer some of these questions, collaborating with Dr Guillaume Dubois, (Scientific Director at Arioneo Ltd– a company that developed Equimetre©, an exercise tracking device for horses); and Dr Emmanuelle van Erck-Westergren of the Equine Sports Medicine Practice, Belgium.

They monitored 530 thoroughbred racehorses, ridden by 103 different work riders (66 male, 37 female) over a total of 3,568 work-outs at Ciaron Maher’s racing yard in Victoria, Australia. Variables such as speed, stride length and frequency, horses heart rate and rate of recovery were recorded with the EquimetreTM

The investigators found no effect of sex of the jockey on any objectively measured outcome variable, measured from slow-canter to hard, race-pace gallops. But would this lack of effect of sex of jockey in training, also translate to actual race results, where many other variables come into play?

Taken together, the researchers found minimal effect of the sex of the jockey on both training and race outcomes. A report of the study is published at Research Square.

Some curious effects were observed. For example, recovery of racehorse heart rate after exercise appeared influenced by sex of the rider, but only when the usual training intensity on each track surface (grass or sand) was reversed.

The researchers suggest that perhaps male work-riders, more so than female, anticipated the ‘expected’ training-intensity (e.g. gallop on grass) and their proposed anticipation was transmitted faithfully to the horse, who responded with higher or lower heart rate. Further work is needed, however, to confirm this effect. When considered across all training sessions, then no difference in expected recovery rates of racehorses were noted between male and female jockeys.

“Our study is the first to objectively assess whether the sex of a jockey has an influence on any aspect of racehorse physiology and performance. The data convincingly suggest the answer is no and offers a new perspective on the possible balance of elite male and female jockeys on the start line of races” said Ms Charlotte Schrurs, PhD student and lead author with Professor David S Gardner.

“Efforts to favour a more ‘inclusive environment’ would greatly contribute towards equal opportunities and the promotion of fair competition within this highly popular and fascinating sport.”

Does sex of the jockey influence racehorse physiology and performance, (2022).

More details of the EquimetreTM