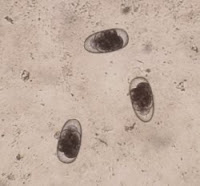 Topical applications are easy to administer and may reduce the risk of injury to the operator. Pour-on anthelmintics have become popular for treating cattle and have been shown to be effective. However, experts disagree on the value of pour-on preparations for deworming horses.

A study, supervised by Professor Adolfo Paz-Silva at the University of Santiago de Compostela in Spain, and published in the Equine Veterinary Journal, examined the use of a pour-on anthelmintic in naturally infected Pura Raza Galega horses.

Over a 21-week period, the researchers compared the fecal worm egg production in untreated animals and in horses treated with ivermectin pour-on (at double the cattle dose rate.)

The researchers concluded that the pour-on ivermectin preparation was highly successful against gastrointestinal nematodes. They suggest that it appears to provide a useful treatment option for large groups of horses at pasture.

However, a report by Dr Cengiz Gökbulut and others published in Veterinary Parasitology paints less favorable picture.

The study looked at the absorption of ivermectin after oral, topical or intravenous administration and how the mode of administration influenced the efficacy of the treatment.

One group of horses was treated with equine oral ivermectin paste (at 0.2mg/kg); a second with bovine pour-on (at the recommended cattle dose rate of 0.5mg/kg) and a third group was treated with an injectable cattle preparation (given intravenously at 0.2mg/kg).

Compared with the oral paste, the pour-on preparation resulted in lower but more persistent plasma concentrations. It was also less effective at reducing the fecal strongyle worm egg count.

The authors of the report warn that the poor plasma availability after topical application could result in sub-therapeutic levels of ivermectin, which could encourage the development of ivermectin-resistant parasites.

Read more about research into pour-on ivermectin in horses.
Posted by Mark Andrews at 8:14 pm