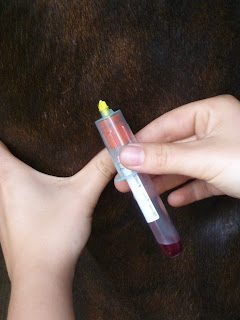 Most horses throw off the infection, caused by Streptococcus equi, within a few months of an outbreak. But some remain infectious. These carriers usually retain the infection in the guttural pouches at the back of the throat. They carry and excrete the bacteria without showing any sign of disease.

The best way to identify carriers is by culturing a series of swabs from the nasopharynx, or by examining a guttural pouch wash for Streptococcus equi DNA (a qPCR test). Such methods can be time consuming and costly.

Serological testing for S. equi antibodies has become popular in clinical practice to screen for strangles carriers. However, a growing body of research suggests that this method cannot be relied on.

A study by John Pringle and colleagues at the Swedish University of Agricultural Sciences, Uppsala, and the Equine Veterinary Clinic, Destedt, Germany, followed three groups of horses for between six months and two years after strangles outbreaks.  A full report of the work is published in the Journal of Veterinary Internal Medicine.

Carriers were defined as horses from which S. equi could be cultured, or S. equi DNA could be found on qPCR test, in samples from the nasopharynx or guttural pouches.

The researchers compared the clinical appearance, guttural pouch endoscopy, and inflammatory markers between carriers and non-carriers and found no real difference between the two groups. Neither did serology distinguish carriers from non-carriers.

They conclude: “Silent carriers of S. equi do not differ clinically or on markers of inflammation to their noncarrier herd‐mates. Moreover, serology alone will not distinguish carriers in comingled horses.”