A salutary reminder of the danger of importing anthelmintic resistance is given in a recent report. 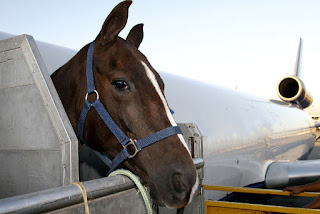 Martin K Nielsen, Schlaikjer Professor of Equine Infectious Disease at the M.H. Gluck Equine Research Center, Department of Veterinary Science, University of Kentucky, Lexington, and others, describe a case of macrocyclic lactone (ML) resistance in a group of Thoroughbred yearlings imported from Ireland to the US.

The findings emphasise that the global movement of horses has the potential to quickly spread ML-resistant parasites around the world.

Anthelmintic resistance to benzimidazole and pyrantel is widespread among the cyathostomins (small redworms). The macrocyclic lactones (such as ivermectin and moxidectin) are generally effective, but there have been occasional reports of resistance.

Thoroughbred yearlings imported from Ireland to the US were found to have evidence of ML resistance when faecal egg count reduction (FECR) tests were carried out. The three batches of imported yearlings had FECR test results ranging from 93.5% to 70.5%. (FECR test is the standard method of assessing resistance in cyathostomins. If the FEC is not reduced by 95% or more after treatment with a macrocyclic lactone such as ivermectin, that is interpreted as evidence of resistance.) When the test was repeated after a further ivermectin treatment in two of the groups the FECR results were even lower.

In contrast, three groups of US bred yearlings had FECR test results of 99-100% after treatment with ivermectin.

Full details of the study are published in the International Journal of Drugs and Drug Resistance. The authors point out that “this case clearly illustrates the importance of quality routine FECR testing, which immediately informed the farm manager of the situation and allowed him to react in time by keeping the populations completely separate, thereby avoiding an introduction of the resistant parasites to the entire facility.”

They strongly recommend that equine operations heed this threat to equine health, and routinely monitor anthelmintic efficacy on a yearly basis.