Puncture wounds at the coronary band or in the sole are not uncommon in horses.  Although the site of 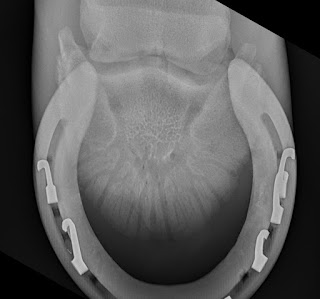 the injury may be obvious, it is often less clear whether any foreign material remains buried in the wound.

Researchers at the Philip Leverhulme Equine Hospital, University of Liverpool, conducted a study to compare the value of different imaging techniques for identifying foreign bodies in horses’ feet.

Computed tomography (CT), magnetic resonance imaging (MRI) and digital radiography (DR) were used to obtain images, which were then examined by the clinicians.

The researchers found little variation between the clinicians studying the images. CT was the most useful imaging modality, having a higher visibility score, sensitivity/specificity, and interrater agreement for detection of all materials; particularly slate, glass, and dry wood, compared to the other imaging modalities.

They found that foreign bodies were often visible on MRI, although the images were generally not clear enough to determine the type of material involved. They also  found that even relatively large foreign bodies consisting of plastic or wood were not detectable on DR.

The work is published in Veterinary Radiology and Ultrasound. The authors comment that although it is not usually necessary to identify the specific material involved, it is important to select an appropriate imaging technique to detect the suspected foreign body.

They suggest that, in cases with negative findings on MRI and DR, where there is a suspected foreign body within the hoof, particularly in cases where plastic or wood fencing or glass materials have been found at the scene of injury, CT examination should be considered.