Do horses recognise themselves in mirrors? 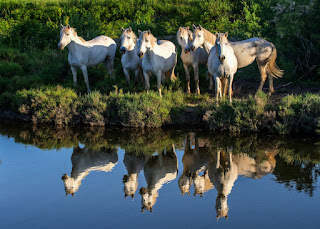 Recognising that the individual appearing in the mirror in front of you is actually you is considered to be a sign of self-
awareness (known as “Mirror self-recognition” or MSR).

Scientists can investigate this behaviour by using a “mark test”. A coloured (visible) or colourless (invisible) mark is placed on the face – somewhere that can only be seen by the animal looking at a reflection in a mirror.  Then they watch to see if the subject pays more attention (touching or scratching) to the part of the body with the visible mark than it does to the part with the invisible mark. If it does, this suggests the animal recognizes its reflection.

Mirror self-recognition is rare in animals other than apes but has been reported in dolphins and Asian elephants.

Recent research by researchers in Italy found evidence of self-recognition in horses. The study, by Paolo Baragli of the University of Pisa, and colleagues, used the “mark test” to investigate horses’ response to their reflection.

Fourteen horses took part in the experiment. The research team drew a cross shape on the horses’ cheeks using either coloured or colourless ultrasound gel and compared the horse’s response.

The researchers wanted to know if the horses were more interested in the coloured visible marks than in the clear invisible ones.

They found that the horses spent about five times longer scratching their faces in front of the mirror when they had a visible mark compared with one made with a colourless marker.

The research team concluded that it wasn’t the sensation of the marker gel on the skin that prompted the horses to scratch, but rather that they scratched because they could see the coloured mark.

They concluded that the horses saw the marks in the mirror, understood that those marks were on their own faces, and were trying to remove them. In other words, they recognized their reflections.

If horses had toes: demonstrating mirror self-recognition at group level in Equus caballus.

See also this article in the Conversation:

Many years ago the Equine Behaviour Forum paid a group visit to the Army Remount Depot at Melton Mowbray, where we saw a fascinating demonstration of military training. The indoor school had mirrors at the ends of each long side and we were told that one horse, cantering towards the reflection, jinked and swerved trying to avoid the 'other horse' cantering towards him (as he thought) and ended up jumping 'through' (into) the mirror, apparently without hurting himself. Henceforth, he was renamed Reflection!

During the discussion, an EBF member told us about a horse being shown a reflection of himself in a large, freestanding mirror. After sniffing and touching the mirror, he walked round behind it to try to find the 'other horse'.