Prebiotics may do more harm than good according to a recent study in Germany.

Prebiotics are often added to horse feed in order to stabilise the horse’s intestinal flora and promote good digestive health. They are indigestible fibres that can stimulate the growth and activity of certain beneficial bacteria in the large intestine. 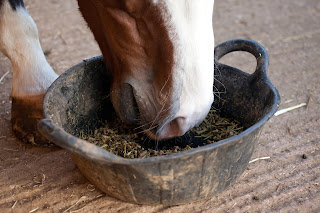 However, researchers at Martin Luther University Halle-Wittenberg (MLU) and the University of Veterinary Medicine Hannover (TiHo) found that prebiotics only have a limited stabilising effect on the intestinal flora of horses. Before they can reach the intestines, commercially available supplements partially break down in the animals' stomachs, which can lead to inflammation of the stomach lining.

The team therefore suggests preparing prebiotic food supplements so that they don't take effect until they reach the large intestine. The study appeared recently in the journal "PLOS ONE".

"Horses have a relatively small, non-diverse core microbiome and are therefore very susceptible to digestive disorders," explains Professor Annette Zeyner, head of the animal nutrition group at MLU. However, according to the scientist, insufficient research has been conducted on whether the use of prebiotics actually does produce the desired effects. Her research group explored this question in partnership with Professor Gerhard Breves’ lab from TiHo.

In addition to their normal feed, six animals received JAM. Another six horses received a placebo with their normal feed. The researchers then analysed the balance of bacteria in the digestive tract of the animals of both groups.

They found that the prebiotics were already being fermented in the stomach by the microorganisms naturally living there - i.e. they were taking effect much too early. "The fermentation process leads to the formation of organic acids that - unlike in the large intestine - can damage the mucous membrane of the horse’s stomach," says Maren Glatter, a member of Zeyner’s group and lead author of the study.

However, the bacterial diversity of the entire digestive tract did increase, which probably also produces the desired protective effect. "Still, the prebiotics are probably more harmful than beneficial when used in their present form," Zeyner surmises. Instead, the substances must be treated so that they arrive in the large intestine in one dose in order to have a positive effect on the intestinal bacteria living there without stimulating overactivity.