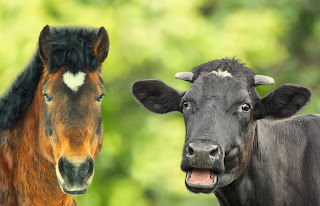 With a few exceptions of minor significance, gastro-intestinal parasites of horses and cattle are host specific. Thus, infective stages of horse worms ingested by cattle will not develop to adults (and vice versa).

Not only do horses and cattle play host to different species of gastro-intestinal parasites, they also have different grazing habits. Horses tend to graze close to the ground and avoid areas that have been previously contaminated with faeces – producing “lawns” and “roughs.” Cattle, on the other hand, cannot graze so closely to the ground, but will graze areas avoided by horses.

The study, by Forteau, Dumont and colleagues looked at the management and worm control on horse breeding farms in two regions of France - some of which employed mixed grazing of horses with cattle.

Using surveys and face to face interviews, the researchers recorded details such as stocking rate; proportion of pasture used for grazing only or for cutting and grazing; and the extent of integration of anthelmintic control and pasture management.

Among the findings were:

They conclude that mixed grazing of horses with cattle “opens a promising alternative for controlling horse parasitic infection that remains largely unknown by horse breeders.”

Is there any research to suggest the same positive results when horses share grazing with sheep?