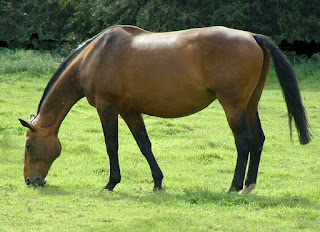 A four-year trial has been unable to show that vaccination can protect against grass sickness.
Evidence suggests that Equine Grass Sickness (EGS) may be associated with the bacterium Clostridium botulinum (C. botulinum) type C, which is found commonly in soil and can produce various toxins.

As it is not possible to reproduce grass sickness experimentally, the researchers conducted a field trial to determine the efficacy of C. botulinum type C vaccination. The aim was to test the ability of the vaccine to prevent naturally occurring EGS by comparing EGS incidence between groups of vaccinated and placebo-treated horses and ponies.

The study was co-ordinated by the Animal Health Trust, in collaboration with the veterinary schools of the Universities of Edinburgh, Liverpool and Surrey, and with support of the Moredun Foundation Equine Grass Sickness Fund.

The research team recruited over 1000 horses and ponies throughout England and Scotland. To be included in the study, the animals had to live on premises where grass sickness had occurred before. Horses and ponies were randomly assigned to two groups: vaccination or control. The primary treatment course comprised three doses of either the vaccine or placebo administered at 21-day intervals. Twelve months later, a further booster dose of either vaccine or placebo was given.

As the study was carried out on premises with a history of grass sickness, the research team anticipated that there would be enough cases to produce a statistically significant difference between the vaccinated and control groups. Unfortunately, only nine cases of grass sickness occurred in the study population – considerably fewer than would have been expected from recent history.

So, unfortunately, the study was unable to reach any conclusion about whether the vaccine was effective in preventing the disease.

However, some useful findings did emerge from the study. The vaccine was shown to be safe and, unlike the placebo, did produce a significant antibody response. Most horses and ponies in the vaccine group had a significant immune response following the primary vaccination course. (C. botulinum type C antibody levels were on average 2.5 times higher after the primary course of injections than before the first vaccination.)

The research team also report that, consistent with previous studies, both young animal age and low C. botulinum type C antibody levels were significantly associated with an increased risk of EGS.
They add that, for the first time, findings from this trial confirmed that low C. botulinum type C antibody levels were found in horses and ponies affected by EGS before the onset of the disease. The results highlighted the key role a horse or pony’s immune response has in their risk of developing EGS.

Dr Richard Newton, Director of Epidemiology and Disease Surveillance at the Animal Health Trust, said: “Although the EGS field trial did not demonstrate a significant protective effect of the C. botulinum type C vaccine against EGS, this truly unique research has still achieved a number of things.  We now have a greater understanding of equine grass sickness and the trial provided further evidence of vaccine safety under conditions of field use.”

Dr. Jo Ireland from the University of Liverpool added; “We are so grateful to all the veterinary practices, horse owners and supporters who helped make this research possible. The significant amount of data that has been collated during this nationwide field trial will be a very valuable resource for subsequent research studies to benefit future generations of horses and ponies.”